Is a War Over Ukraine Inevitable? 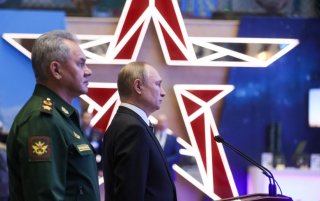 Russian president Vladimir Putin increasingly appears to have adopted a “heads I win, tails you lose” attitude toward NATO in general and the United States in particular. He continues to authorize the buildup of forces near Ukraine—estimates of their current levels range from about 60,000 to 75,000 with at least double that number expected to arrive from other parts of Russia in the next few weeks. He threatens military action if the West continues “a clearly aggressive line,” notably by maintaining an open door for expansion along Russia’s borders. At the same time, his foreign ministry has released two draft documents that seek to alter the current strategic balance in Europe, limit American presence there, and undermine NATO’s cohesion. He seems confident that if he invades Ukraine the West will not resist him; if he does not invade because the West has capitulated to his demands, he will have accomplished far more than simply to restore Kiev’s subordination to Moscow.

Following upon Putin’s conversation with President Joe Biden to establish a mechanism for discussing Russian grievances toward the West, Russia has issued a draft “treaty” that would have America, among other things, “undertake to prevent further eastward expansion of the North Atlantic Treaty Organization and deny accession to the Alliance to the states of the former Union of Soviet Socialist Republics.” In other words, not only would the Russian draft have Washington veto Ukraine (and Georgia’s) entry into NATO, but the language could be interpreted to constitute a demand that current NATO members that were once part of the USSR, namely the Baltic states, should be expelled from the alliance.

Moreover, Moscow would have the United States agree to refrain from deploying military forces “in the areas where such deployment could be perceived by the other Party (i.e. Russia) as a threat to its national security, with the exception of such deployment within the national territories of the Parties.” This provision would enable Moscow to veto all American deployments to Europe on the grounds that they threaten Russian security, while Russia could, of course, mass forces along its borders with NATO states, including in its Kaliningrad exclave.

And if that were not enough, the Russian draft would prevent the United States from deploying heavy bombers and naval forces in international airspace and international waters “from where they can attack targets of the other Party.” Though nominally applying to both sides, in practice the focus would be on both American bombers based outside the European continent and naval units operating in the Black and Baltic seas and the western Pacific.

The second of the foreign ministry’s two documents, a draft agreement with NATO, echoes some of the provisions of the draft treaty, such as seeking a commitment to prevent any further NATO enlargement—it specifically calls out Ukraine—but goes even further. It would prevent any NATO activity in the former Soviet space, and would limit deployments to the former Warsaw Pact states to forces stationed as of May 27, 1997, that is, prior to the Madrid Summit when NATO invited the Czech Republic, Poland, and Hungary to join the alliance.

Not surprisingly, both the United States and NATO have rejected Russian demands that hark back to those of Joseph Stalin and his Soviet successors. The Kremlin certainly must have anticipated such a reaction. Nevertheless, Putin is clearly emboldened by the West’s relatively weak response to his military threat to Ukraine. He likewise is unfazed by threats of new sanctions. He has made it clear that additional Western military assistance to Ukraine would constitute a pretext for Russian forces crossing the border, most likely into the eastern part of the country. In other words, he is employing the crisis that he has generated as a vehicle for extracting concessions that would have been unimaginable in the recent past.

As the United States has again learned to its chagrin in both Afghanistan and Iraq, and as Russia’s Soviet predecessor found when it too fought a war in Afghanistan, conflicts rarely run a pre-ordained course. Hostilities in Ukraine could spread elsewhere, undermining decades of European stability and, by virtue of potential escalation to the nuclear realm, posing a serious threat to Russia’s security as well. If Putin is serious about resolving Russian concerns regarding NATO expansion, he should order no further buildup on the Ukrainian border. Those forces that are already there are more than sufficient a deterrent to any plans Kiev might have of retaking the breakaway provinces of Donetsk and Luhansk by force. Should it become clear that Kiev has no intention of doing so, Russia should begin gradually to draw down those forces as well, terming them part of an exercise.

In the meantime, Washington could limit its military assistance to Kiev by restricting arms shipments to low levels of purely defensive systems as it has done until now. NATO could do the same. Under these circumstances, both sides could begin to negotiate meaningfully, something that would be impossible with the specter of war in the background.

Ultimately, the choice is Putin’s. If he prefers to continue the force buildup on Ukraine’s border, he is likely to provoke an increasingly tough NATO response both economically—even previously passive Germany is now threatening to cut off the Nord Stream 2 gas pipeline—and militarily. If, on the other hand, he is serious about a negotiation, he will find Washington and NATO ready to talk, though not on the basis of terms set out in the two draft agreements that would have made Stalin proud.