The West Must Brace for More Chinese Naval Aggression 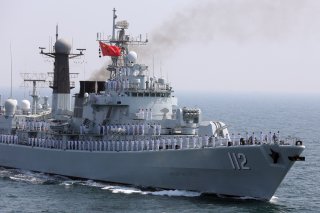 Between April 26 and May 26, Chinese People’s Liberation Army Air Force (PLAAF) interceptors interfered with the navigation of a U.S. C-130 Hercules transport aircraft, an Australian P-8 surveillance aircraft, and a Canadian CP-140 Aurora Maritime Patrol Aircraft conducting surveillance off the coast of North Korea. The worst possible outcome from such an encounter is a fatal mid-air collision, which last occurred in April 2001, off the coast of Hainan Island, between a U.S. Air Force EP-3 and a Chinese J-8 fighter aircraft, killing a pilot. Previously, between July 1952 and February 1960, the United States suffered a total of twenty-eight military fatalities in four incidents at sea with China, not including at least a dozen other hostile encounters. In three instances—in 1953, 1956, and 1968—U.S. surveillance aircraft were shot down.

The April 2001 EP-3 incident resulted in the internment of the crew on Hainan Island, where they had landed their disabled aircraft, and the examination of the aircraft’s sensitive technology. Similar incidents occur with some frequency when patrols are conducted near the frontiers of adversaries. In March of 2007, fifteen British sailors and Royal Marines were detained for almost two weeks by the Iranian Revolutionary Guards Navy. Moreover, ten U.S. sailors were detained and released by Iran near Faris Island in January 2016. The former case involved an apology from the United Kingdom, whereas in the latter case, the release was accelerated by a U.S. threat to retaliate. In 1968, in the vicinity where Canada is conducting its patrols, North Korea seized the USS Pueblo, a U.S. surveillance vessel, and held the crew captive for nearly a year, making use of torture and killing one crewman. China’s increased military confidence means that Canada can expect an increase in these encounters and confrontations, particularly in the East China Sea, the Straits of Taiwan, and the South China Sea.

It is important that U.S. allies like Australia and Canada not be weak links in the coalition, notably because they were deliberately targeted by the Chinese PLAAF. These confrontations were most likely based on the calculus that Melbourne and Ottawa can be intimidated to reduce their commitments to East Asian deployments. Canada should be capable of standing on its own so that it does not become a material distraction to the United States or Japan in the region, who are already outnumbered by China’s land-based air platforms. This means exercising prompt search and rescue procedures to avoid the crew falling into Chinese hands and Ottawa suffering a replay of its ineffectual response to China’s detention of two Canadian citizens for nearly three years.

An incident at sea is more likely in interactions with China because of Beijing’s exercise of asymmetric warfare, where paramilitary assets like the People's Armed Forces Maritime Militia engage in aggressive maritime and territorial incursions to erode the resolve of target states. Because of the size of these paramilitary forces, their indistinguishability from the Chinese fishing fleet, and the support of the People’s Liberation Army Navy (PLAN), the world’s largest fleet by tonnage, they are an effective instrument of intimidation. Countries like the Philippines, Indonesia, and Taiwan are overwhelmed by the constant incursions of ships and aircraft, reducing their margins of safety to avoid escalatory incidents.

As a general rule, China is uncompromising when it comes to what it sees as infringements upon its national territory. There is domestic support for China’s stance, where patriotism is easily stoked by the desire to reclaim territories and tributary status lost during China’s Century of Shame (bainiande ciru). This is because the sea was the principal avenue of China’s subjugation from at least 1840 up to the HMS Amethyst incident of 1949, when Western forces were effectively expelled from China’s interior.

For example, with respect to its immediate neighbors, confrontational incidents provoked by the PLAN include the seizure of 158 Japanese fishing vessels between 1950 and 1954, as well as periodic displays of force by armed vessels near the disputed Senkaku Islands. In January of 1974, China seized the Paracels from Vietnam, successfully deterred Vietnamese deployments into the Spratlys in April 1976, exchanged fire with Vietnamese ships in 1984, sank two Vietnamese warships in 1987, and shelled a Vietnamese freighter in the Spratly Islands in 1988. Beijing has since had confrontations with the Philippines, the first of which began in 1995 over reefs in the same chain. Most confrontations with the U.S. Navy were concentrated in the 1950s and 1960s; the 1970s and 1980s were a period of nominal collusion against the Soviet threat. Between 1950 and 1998, the United States deployed aircraft carriers against China a total of eleven times, including eight deployments on behalf of Taiwan, two on behalf of the United Kingdom, once on behalf of India, and another to shadow the Soviet Navy and the PLA during the latter’s invasion of Vietnam in 1979. In one incident, the U.S. Navy deployed a total of six carriers.

What is particularly worrying is that China skipped the December 2020 meeting of the Military Maritime Consultative Agreement (MMCA), criticizing the proposed U.S. agenda in bad faith, although it did resume attendance at the December 2021 meeting. The MMCA is a U.S.-China consultative process established in 1997 that aims to “promote safety in naval and air operations, and to avoid incidents at sea.” The U.S. Air Force has indicated it is seeking similar talks to reduce the likelihood of air-to-air incidents along the Asian littoral with China. However, the MMCA has not reduced China’s aggressive practice of close air encounters.

In January 1998, Secretary of Defense William Cohen and Gen. Chi Haotian of China signed the MMCA on behalf of the militaries of the United States and China. It was hoped that the MMCA would be a prelude to a Sino-American equivalent of the 1972 U.S.-Soviet Incidents at Sea Agreement.

The build-up of the Soviet fleet in the 1960s led to a sharp increase in the number of incidents at sea with the ships of the U.S. Navy and its allies. These were often in the form of simulated attacks, the launching of flares, deliberate collisions, close aerial over-flights, interference with maneuvers, and other hazards to good navigation. The most serious of these were simulated anti-carrier attacks conducted against the U.S. Sixth Fleet during the 1970 Syrian-Jordanian crisis. With the increased availability of tactical nuclear weapons at sea, as well as the importance of the oceans in hiding strategic nuclear submarines, these incidents had potentially serious consequences. Whether through the incompetence, zeal, or uncertainty of a local commander, there was a real danger that a misunderstanding could escalate into a serious clash.

Aware of the serious implications of these developments, the United States offered negotiations in March of 1968. The offer was accepted by the Soviet Union in November of 1970, and an agreement was signed on May 25, 1972. Besides reaffirming the principles of safe navigation, the treaty made a number of specific stipulations. First, it required that surveillance by ships and aircraft be conducted from a distance (Art.III.4). Second, it prohibited simulated attacks or the launching and dropping of objects on the naval vessels of the other (Art.III.6). Third, it required three to five days’ notice for large-scale maneuvers that might prove a hazard to navigation (Art.VI.1). A follow-on protocol for the extension of these provisions to non-military vessels was approved in 1973. The first major violation of the Incidents at Sea Agreement came as a consequence of the October 1973 Arab-Israeli War. However, this incident proved to have few lasting consequences. In 1983, Secretary of the Navy John Lehman credited the agreement with having reduced the number of naval incidents in the 1970s and 1980s.

The more swashbuckling a navy China permits, the more crucial an Incidents at Sea Agreement becomes for the preservation of stability in the Pacific. This is an arms control measure Ottawa should actively pursue.

Dr. Julian Spencer-Churchill is associate professor of international relations at Concordia University, and author of Militarization and War (2007) and of Strategic Nuclear Sharing (2014), and a former operations officer, 3 Field Engineer Regiment. He has published extensively on security issues and arms control, and completed research contracts at the Office of Treaty Verification at the Office of the Secretary of the Navy, and the then Ballistic Missile Defense Office (BMDO).