Why ‘Confrontation’ with China Cannot Be Avoided 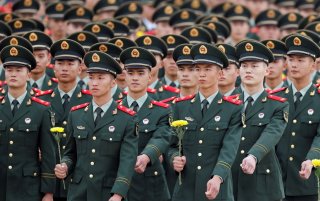 Last week, President Joe Biden held a high-profile virtual summit with his Chinese counterpart, Xi Jinping. The summit was intended to place relations between Washington and Beijing on a more stable footing, but (other than several platitudinous statements) the meeting produced no new breakthroughs for Sino-U.S. cooperation. Indeed, the inefficacious exchange raises a bigger question about the true nature of the U.S.-China relationship.

Earlier this year, U.S. secretary of state Antony Blinken stated that U.S. policy toward China includes a mix of “cooperation, competition, and confrontation.” Unfortunately, he is only about one-third right.

Despite the fond hopes for cooperation on shared challenges, and all the talk in Washington about great power “competition,” the sobering reality is that the Sino-U.S. relationship is increasingly dominated by its most confrontational elements.

The term “great power competition” became a mantra in Washington after the publication of the 2017 U.S. National Security Strategy. The document correctly recognized that the previous U.S. strategy of trying to cultivate China as a “responsible stakeholder” in a rules-based international system had failed and that a new, tougher approach was needed. The Biden administration has since updated this term to “strategic competition,” promising to prioritize the most strategic, or important, areas of competition.

But competition is not the best word in either case. Competition implies that participants play, and are bound by, the same, agreed-upon rules. Firms compete for market share and athletic teams vie for a championship title within clearly delineated and enforceable bounds.

The U.S.-China rivalry, however, cannot fairly be described as competition because the Chinese Communist Party (CCP) is systematically violating generally accepted international laws and norms. In the economic sphere, Beijing systematically preys on the global economic system in defiance of its World Trade Organization obligations. It steals intellectual property, subsidizes domestic champions, restricts foreign businesses operating in China, and undercuts competitors with slave labor. The CCP contravenes international humanitarian law by engaging in “crimes against humanity” and “genocide” against Muslim Uighurs and other minorities at home. Militarily, Beijing seizes contested territory from its neighbors, including islands in the South China Sea, despite the Hague Tribunal’s rulings against China’s bogus claims.

So too is it hard to find much evidence of cooperation in the current U.S.-China relationship. Even in areas where analysts express hope for engagement, the relationship is best characterized by confrontation. On climate change, China is the world’s largest greenhouse gas emitter, accounting for 28 percent of global emissions—nearly double the amount of the United States, and more than all the developed countries combined. As Washington and other powers cut their emissions, Beijing promises to continue increasing emissions until 2030.

In global public health, China is also a major problem. Its initial delay in reporting Covid-19 turned a local breakout into a global pandemic, and Beijing blocks a meaningful investigation into the disease’s origins to this day, making a future reoccurrence more likely.

The story is similar in arms control. China is engaging in an across-the-board nuclear arms expansion that includes building: hundreds of nuclear missile silos in the desert, new nuclear bombers and submarines, and hypersonic missiles. Presidents Barack Obama and Donald Trump both desired arms control talks with Beijing, but the CCP refused to even come to the table. It is doubtful that Biden will have better luck.

To be sure, there remains some meaningful cooperation between the two powers. Washington would like Beijing to continue purchasing American agricultural products, for example. And Beijing wants Washington to retain its commitment to a “One China” policy with regard to Taiwan. But even these remaining elements of cooperation are also increasingly becoming subjects of dispute.

This is not merely a semantic exercise; the words we use have real effects on how we think about the China challenge and what we should do about it. The U.S. government, the American public, U.S. businesses, and U.S. allies and partners need to fully understand that this is an increasingly confrontational relationship, and it is likely to get worse before it gets better. They need to prepare for this reality by getting tougher with China when it breaks the rules and by looking to disentangle themselves from China’s malign influences. Presenting the U.S.-China relationship as a recipe with equal parts cooperation and above-the-board competition creates unhelpful misperceptions with potentially counterproductive results.

This is not to say that Washington desires confrontation with China. Clearly, it would prefer a much more cooperative relationship. But that does not appear possible so long as Xi (and perhaps the Chinese Communist Party) remains in power. The United States and its allies, therefore, should push back hard on China’s rule-breaking to defend themselves and to show China’s leaders that challenging the United States and its allies is too difficult and costly for Beijing, and ultimately not in China’s own self-interest.

With regard to China’s nuclear buildup, for example, Washington should augment its own deterrent, including with theater nuclear forces in the Indo-Pacific, to demonstrate to Xi that his aggressive arms expansion will only make China less safe. Seeing his security situation deteriorate may be the only way to persuade Xi to engage in arms control talks. Hoping for cooperation alone will not produce the desired result.

Some will argue that confronting the CCP will lead to more aggressive Chinese behavior and an increased risk of military conflict. They have it backwards. A resolute policy of confrontation now is the United States’ best hope of eventually convincing Beijing to change course and put us on a path toward a genuinely competitive and cooperative future.

Matthew Kroenig is a professor of government at Georgetown and the deputy director of the Atlantic Council’s Scowcroft Center for Strategy and Security. He was a senior policy adviser in the Office of the Secretary of Defense from 2017-2021. His latest book is The Return of Great Power Rivalry: Democracy versus Autocracy from the Ancient World to the US and China.

Dan Negrea is a senior fellow in the Scowcroft Center. He served in the Department of State from 2018-2021 as the Special Representative for Commercial and Business Affairs and as a member of the Secretary’s Policy Planning Staff.