Why America Needs to Revive Its Relationship With the South Caucasus 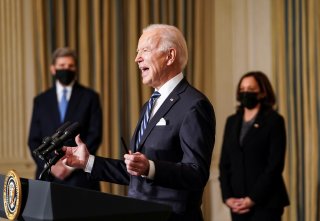 It is always refreshing to read alternative viewpoints and strong opinions on particular topics. Nevertheless, when Michael Rubin noted that “to arm or support Azerbaijan today is to empower the Kremlin and Khamenei, not to bring security or further American interests in the region,” his claim was very far from the reality on the ground. U.S. policymakers should see things as they really are in the South Caucasus.

There have been two constants in the South Caucasus since the disintegration of the USSR.

The first is Armenia has been a member of every Russian-led integration project, a fact commonly ignored by Western analysts and policymakers. Since 1994, Armenia was a founding member of the Collective Security Treaty Organization, a Russian attempt to establish a NATO-type structure among post-Soviet states.

Rubin seeks to downplay Russia’s military bases in Armenia in Gyumri and Erubuni airport, Yerevan. Russia sees these bases in the same manner as all of its bases in the former USSR; that is, as a projection of military force throughout a territory which the Kremlin views as its exclusive sphere of influence. President Dmitri Medvedev described Eurasia as Russia’s “zone of privileged interests.”

Russian bases in Armenia most emphatically do therefore constitute an “endorsement” of Russian foreign policy. Azerbaijan, Georgia, Ukraine and Moldova have steadfastly always opposed Russian military bases on their territory precisely because such a step would constitute an endorsement of Russia’s demand to be recognized as the regional hegemon in Eurasia.

Turkey and Azerbaijan have never posed any military threat to Armenia. As the international organization Human Rights Watch reported, during the forty-four-day second Karabakh war the only rockets to be fired outside the conflict zone were by Armenia into Azerbaijan. Baku never undertook any military activity inside Armenia.

In 2013, the reaction in Armenia and Ukraine was completely different to Russian pressure to withdrew from the European Union’s Eastern Partnership Association Agreement and join the CIS Customs Union (which became the Eurasian Economic Union in 2015).  In that year, Armenia acquiesced to Russian demands and five years later never contemplated an “Armexit” during its color revolution which brought Nikol Pashinyan to power.

In contrast, Ukrainians staged an uprising, the Euromaidan Revolution of Dignity, overthrowing pro-Russian leader Viktor Yanukovych during which one hundred protestors were murdered and over one thousand wounded and injured. The following year, Ukraine signed an Association Agreement with the EU.

It is quite clear that whereas Armenia sees its national interests in Eurasia, Ukraine sees them in Europe.

The second constant is that Georgia and Azerbaijan have pursued pro-Western policies. Under Presidents Eduard Shevadnadze and Ilham Aliyev this foreign policy was described as multi-vector and similar to those undertaken by Ukrainian president Leonid Kuchma. Multi-vectorism was a pragmatic foreign policy that consisted of expanding integration with the West while continuing cooperation with Russia and the CIS.

All three countries have cooperated fruitfully since 1997 in the GUAM (Georgia-Ukraine-Azerbaijan-Moldova) group. While Aliyev has continued Azerbaijan’s multi-vector foreign policy of integration with the West, Ukraine and Georgia adopted the goals of seeking NATO and EU membership. Moldova, meanwhile, seeks EU but not NATO membership.

There is no conspiracy lying behind Azerbaijan purchasing weapons from Iran; after all, Russia sold weapons to both Armenia and Azerbaijan. Azerbaijan and Georgia, have also purchased weapons from Ukraine. Turkish and Israeli weapons proved to be decisive in Azerbaijan’s military victory in the second Karabakh war.

Rubin exaggerates economic ties between Azerbaijan and Iran to portray this as a geopolitical alliance, which it has never in fact been. Although confidential, open-source reports have surfaced which show that Israel and the United States have used Azerbaijan as a staging post for targeted assassinations inside Iran, hardly a step that Baku would contemplate if Aliev was in Iran’s pocket. The August 2020 assassination of Al Qaeda’s second-in-command Abdullah Ahmed Abdullah (Abu Muhammed al-Masri) was carried out by Israel at the behest of the United States with agents infiltrating Iran from Azerbaijan.

Rubin claims as evidence of close Azerbaijani-Iranian ties a statement by Azerbaijan lamenting the assassination of Iranian Quds Force Chief Qassim Suleimani. But the EU, as its parliament noted, was also taken aback by the assassination and crafted a reaction which consisted of trying “to de-escalate the situation to prevent all-out war, to focus on stabilising Iraq, and to limit damage to the Joint Comprehensive Plan of Action (JCPOA).”

There is no evidence to the claim Iran supported Azerbaijan over Nagorno-Karabakh. Iran and Russia have both officially supported the territorial integrity of Azerbaijan (as well as Georgia, Turkey, Syria, and Iraq) while at the same time unofficially backing separatists in these five countries. In fact, Iran was alarmed by Baku’s military victory which was supported by its Azeri population, constituting fifteen to seventeen million and comprising its largest minority group which is bigger in size than that of the ten million population of Azerbaijan.

The new U.S. administration led by President Joe Biden has a two-fold opportunity to turn the page in its dealings with the South Caucasus. The first is to no longer be AWOL by re-energizing Western ties to this region and reviving the largely derelict Minsk Group, a step which would be welcomed by Azerbaijan, Georgia and, although relations remain difficult, also by Turkey. Azerbaijan would welcome the Biden administration’s support for Georgia’s membership of NATO. The second is for the Biden administration to move away from traditional U.S. and French favoritism towards Armenia and adopt a more balanced position between Yerevan and Baku.

Taras Kuzio is a professor of political science at the National University of Kyiv Mohyla Academy and a Non-Resident Fellow at Foreign Policy Institute, Johns Hopkins University. His latest books are Crisis in Russian Studies? Nationalism (Imperialism), Racism and War  (2020) and The Sources of Russia’s Great Power Politics: Ukraine and the Challenge to the European Order (2018).