Why Biden Is Showing Strength on Russia, And Not Iran 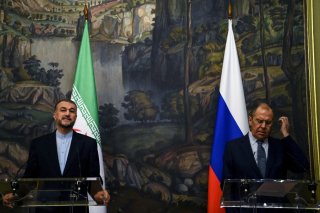 The strong U.S. posture against the rising threat of Russia to Ukrainian sovereignty contrasts with the uncertain U.S. policy on Iran. While the Biden administration is threatening Russia with devastating sanctions and even apparently entertaining arming a guerilla campaign should Moscow invade its neighbor, its response to Tehran's equally malign behavior is muted.

The revanchism of Russian president Vladimir Putin is a clear and present threat to the sovereign nations of the former Soviet bloc and U.S. interests and values. The Islamic Republic of Iran’s Supreme Leader Ayatollah Ali Khamenei’s quest for regional dominance also poses as great a threat today through his interventions in Iraq, Lebanon, Syria, and Yemen.

Yet Iran policy under the Biden administration is inconsistent. Its rejection of the campaign of maximum pressure, its allowance of violations of U.S. sanctions by China and Iran, and its relentless quest to revive a political agreement—the Joint Comprehensive Plan of Action (JCPOA)—which failed to stop Tehran’s nuclear program, undercut the strong rhetoric the administration often uses toward Iran. In the region and in Vienna, Iran has only become more aggressive and demanding.

The inconvenient truth is that Iran is only continuing its longtime strategy of deceit, chaos, and violence that it has deployed for decades—against which accommodation and appeasement have never worked.

Even within the negotiations, there is inconsistency in U.S. policy between Russia and Iran. The State Department’s Deputy Secretary Wendy Sherman has made clear that there will be no discussions about Ukraine without Ukraine and no discussions about European security without Europe. This is not the way negotiations with Iran are taking place. Israel and our Arab allies continue to be denied a seat at the table. This is a mistake because a successful strategy against Iranian malevolence can only succeed with the help of Iran’s neighbors, who are U.S. allies and partners. Only then will accountability and security be ensured.

Russia’s shameless disregard for international norms—as seen in Georgia, Syria, and Ukraine—finds good company with Iran’s mockery of peace and international good faith. Putin changes international borders by force. He orders his political opponents poisoned, jailed, or killed. On his watch, Russia orchestrates disinformation campaigns in free societies, meddles in U.S. elections, and engages in aggressive cyberwarfare. It is a steady drumbeat of hostilities and Iran matches it.

The Iranian regime directly targets Americans. Its terrorist partners and proxies continue to fire drones and rockets at U.S. military personnel in Iraq and Syria and those of our allies and partners in Israel, Saudi Arabia, and the United Arab Emirates (UAE)—including a fatal attack this month targeting civilian sites in Abu Dhabi where international business leaders were gathering for an expo and South Korea’s president was visiting.

Iran continues to hold Americans hostage, and recently published a sanctions list—widely seen as a hit list—comprised of current and former U.S. officials, including former U.S. ambassador to the United Nations Nikki Haley, who sits on the advisory board of the organization we lead, United Against Nuclear Iran.

Tehran also repeatedly threatens to launch terror operations on the U.S. homeland. Earlier this year, Islamic Revolutionary Guard Corps (IRGC) Quds Force commander Esmail Ghaani even boasted of a campaign of terror against the United States from “within.” Last year the U.S. Department of Justice indicted an Iranian intelligence network for attempted kidnapping of the Iranian-American dissident Masih Alinejad on U.S. soil.

These provocations are merely met with statements and piecemeal sanctions presumably because of a narrow focus on reviving the failed Iran nuclear agreement.

Some may argue that the United States has maxed-out what it can realistically do against Iran in contrast to Russia, which has not been subject to the same degree of isolation. But that is simply false. The lack of U.S. enforcement of sanctions against Iran, particularly in regard to illicit oil trade with China, the lack of a credible military deterrence, and the seeming anxiety by the United States to remain at the table in Vienna regardless of Iran’s conduct, has not worked.

U.S. policy toward Iran must be clarified and strengthened. The longer we wait, the larger the Iranian threat will be to the region and to the United States.

Joseph I. Lieberman, a former U.S. senator from Connecticut, is chairman of United Against Nuclear Iran (UANI).

Mark D. Wallace, a former U.S. ambassador to the United Nations for management and reform, is chief executive of UANI.