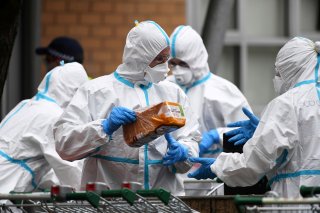 The coronavirus crisis will be over at some point in the next few years. Attention will turn to whether the international community can use this moment of shared pain to build a better future. Perhaps, but a necessary first step is to realize that world order has come to an end and is not coming back any time soon.

World order is rare. It occurs only when there is a shared understanding among the major powers about what constitutes a legitimate action and how to enforce the rules when they break down. Such a moment occurred in 1648 when the European powers agreed to respect each other’s sovereignty, and again after the Napoleonic Wars when they agreed to resist revolution and consult with each other on international crises.

Most recently, signs of world order were evident in the 1990s and early 2000s. U.S. allies in Europe and Asia as well as future rivals like Russia and China and unaligned powers like Brazil and India largely acquiesced in the American-led international order. They went along with innovations like humanitarian intervention and they did not use force to thwart American plans, even if they disagreed with them as in the case of the 2003 invasion of Iraq or the expansion of NATO. Many Americans believed that all major powers would eventually become responsible stakeholders in a shared liberal order.

Unfortunately, it was an illusion. The most important driver of this shared order was not that the rest of the world decided they were happy with American leadership. It was the indisputable fact that the United States was much more powerful than its adversaries.

This period is now over. Rivals like China and Russia took an even more authoritarian turn. They grew more powerful and acquired more strategic options. And they grew more ambitious, coveting their own spheres of influence.

This trend was well underway by 2016. It has accelerated since. China has become more repressive and totalitarian, using new technologies to advance this agenda. It challenges liberal norms internationally and seeks to bend smaller powers to its will using the tools of geoeconomic coercion. Russia has brazenly interfered in the domestic politics of the United States and the European Union and is at the vanguard of challenging the principles of the U.S.-led order.

This divergence marks the end of a brief period of world order. It is unlikely to return in decades. There is little prospect of any understanding between the United States, China, Russia, the European Union, and Japan on what constitutes a legitimate action or how to enforce the rules if they break down. The coronavirus crisis, which along with the Cold War is one of the two greatest challenges to the U.S.-led order since World War II, merely underscores this reality.

The task facing the next American president is to revitalize U.S. leadership of free societies to improve the order they offer their own citizens and each other. This means improving governance in the United States but also using diplomatic leverage more effectively and wisely internationally. It means moving beyond outdated metrics of security to increase ambitions with the Europeans and to deepen relations with Asia’s democracies. It means stopping deterioration in the balance of power with China; competing with China; but also compartmentalizing areas of cooperation on shared problems. It means reducing America’s involvement in the Middle East and being tougher with authoritarian allies.

Above all, it will mean building an international coalition to end the coronavirus crisis and shape the aftermath. The next administration must craft and shepherd a cooperative international response on the production of a vaccine and treatments, to coordinate the rebuilding of national economies so they reinforce a mutually beneficial global economy, to assist developing countries disproportionately weakened by the virus, and to reform global institutions and infrastructure so we are better positioned to deal with the next pandemic and international challenges as a whole.

Robert D. Blackwill is the Henry A. Kissinger senior fellow for U.S. foreign policy at the Council on Foreign Relations. Thomas Wright is the director of the Center on the United States and Europe and a senior fellow in the Project on International Order and Strategy at the Brookings Institution. They are the authors of a new report by the Council on Foreign Relations, The End of World Order and American Foreign Policy.