Will Western Armored Vehicles Be Game Changers for Ukraine? 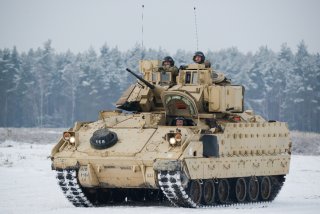 On January 5, three NATO countries—the United States, Germany, and France—announced they would send Ukraine Western-style armored vehicles to support its defense against the Russian invasion. The White House announced its intention to send Ukraine fifty Bradley Fighting Vehicles. Likewise, Germany will send Marder Infantry Fighting Vehicles, and France will provide AMX-10 RC armored fighting vehicles to Ukraine. These vehicles are not the main battle tanks (MBT) that Kyiv continues to ask for, but they are nonetheless important additions to any arsenal. Indeed, these smaller, less-armored infantry and armored reconnaissance vehicles are designed for fighting in concert with MBTs. While these vehicles do not have the punch of an MBT, their weaponry is more than capable of destroying Russian tanks on the battlefield, just as American Bradleys did during the Gulf War.

The introduction of the Bradleys, Marders, and AMX-10s is a shift in how NATO members are arming Ukraine. Previously, NATO states have sent Ukraine Soviet-Era equipment from the reserves of former Warsaw Bloc countries, along with NATO missiles and artillery. The new vehicles will offer Ukrainian forces the ability to conduct some offensive operations in hopes of liberating parts of the country under Russian occupation. Although the switch to Western weapons systems will decrease Kyiv’s dependence on non-Western munitions suppliers, there are reasons to be concerned that the introduction of three similar yet different vehicles may strain the Ukrainian military’s logistical network. Even though NATO is the best in the world at developing and incorporating interoperability standards, no two weapons systems have the same logistics requirements, which may stress Ukraine’s logistical infrastructure and thus soften the positive impacts realized by the introduction of these weapons systems.

Providing soldiers with different web gear and rucksacks is one thing, but giving a military three different infantry combat vehicles with three different anti-tank missiles could cause operational trouble. The introduction of the three new fighting vehicles will require three different maintenance, repair, and overhaul supply chains, three different training processes for crews, the adoption of three different sets of operating procedures, and three different munitions supply chains. It is unlikely that the Ukrainian Army will mix the vehicles at the unit level (i.e., Bradleys and other vehicles in the same formation), but they might operate in the same area, which would increase sustainment and management costs above what is needed to employ one weapon system. From a logistics standpoint, it is usually a best practice to limit the differentiation of weapons systems or vehicles to the minimum level needed to satisfy mission requirements, maximizing logistics effectiveness and reducing opportunities for failure. From a military strategy standpoint, tracking differences in system capabilities and requirements across three platforms aimed toward achieving the same operational capability imbues undue cognitive and planning burdens on the warfighter.

On the other hand, it can be argued that the provision of three different weapons systems might increase some measures of resilience. For instance, if one NATO country decides it can no longer support or sustain its weapons systems, Ukraine will still have support from the other two countries. Also, the addition of three weapons systems plausibly opens up more opportunities for additional NATO allies to support the Ukrainian war effort. For instance, if a smaller ally can provide only limited manpower, training, supplies, or munitions, they may now have more options to choose from when considering what capabilities they can part from without reducing their wartime readiness. Furthermore, having high-quality vehicles will provide Ukrainian troops with extra protection and firepower. Russian commanders recognize the superiority of Western vehicles and might hesitate in taking on units equipped with these weapons. Western vehicles—as well as the signal of support they send—will be a morale booster for the Ukrainians. Pragmatically, Western armies can see how their weapons operate on a modern battlefield and test interoperable battle plans and operating procedures.

In the future, a crisis like the one in Ukraine will likely appear in global hotspots, and nations under attack will similarly ask for aid to repeal aggressors. If NATO is to serve as the arsenal of democracy, we should look to Ukraine for lessons learned. NATO countries should work together to provide vehicles and weapons systems that give the tactical edge needed to win the war, not tax the Ukrainian military’s logistics infrastructure with varying logistical and maintenance requirements. Providing military equipment, training, supplies, and support is commendable, but it’s important to strongly consider logistical problems and opportunities to maximize support with minimal expense.

Dr. Edward Salo is an associate professor of history and associate director of the Heritage Studies Ph.D. Program at Arkansas State University in Jonesboro, Arkansas. Dr. Salo teaches military history and is currently researching the weaponization of heritage in irregular warfare.

Ben Hazen is a Visiting Assistant Professor at the University of Dayton and a retired US Air Force aircraft maintenance officer. His interests are in "tooth to tail" logistics and innovation management and is a founding co-editor (emeritus) of Journal of Defense Analytics and Logistics.