The Yom Kippur War and Ending the Ukraine Crisis 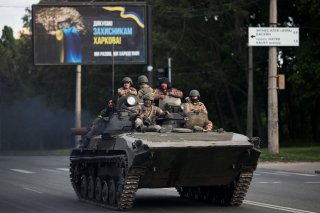 An attack on a neighboring country aimed at challenging the regional balance of power ignited a confrontation between Moscow and Washington, raising fears that the Russians were going to use nuclear weapons as America’s client gained the upper hand in the war. Historical analogies should be handled with care, and the 1973 Mideast War, also known as the Yom Kippur War, was certainly not exactly like the ongoing war in Ukraine. But in some ways it seems more relevant to what is taking place in Eastern Europe today than the 1961 Cuban Missile Crisis, which has been assessed as a model for avoiding direct military confrontation between two nuclear superpowers.

Unlike the Cuban Missile Crisis and like the Russo-Ukrainian War, the 1973 Mideast War was a conventional conflict. Both wars opened with attacks by leaders—Egyptian president Anwar Sadat and Russian president Vladimir Putin—who aimed to change the balance of power in their neighborhoods to achieve their strategic goals: returning occupied Sinai to Egypt and establishing a dominant Russian position in Ukraine. Interestingly enough, the earlier conventional wisdom in both cases was that such decisions didn’t make sense strategically and would prove to be too costly to the military aggressor. It was thought that Sadat couldn’t overcome Israel’s military supremacy and would be defeated on the battlefield and that Putin could achieve his goals in Ukraine without launching a costly full-scale invasion. But years of diplomatic negotiations and a two-year war of attrition failed to force Israel out of Sinai, and despite Russian diplomatic and military pressure, Ukraine seemed intent on solidifying its ties with NATO and the European Union.

Most historians agree that, notwithstanding Israeli fears about the existential threat to the Jewish state posed by the Egyptian attack, or the "end of the Third Temple," Sadat’s goals were more limited and involved crossing the Suez Canal and forcing Israeli troops into defending their positions in the Sinai Peninsula, allowing Egypt to press the international community, including the United States, to return Sinai to Egypt. Historians will likely debate for many years what exactly Putin was hoping to achieve by attacking Ukraine, and whether his goal was to topple the government and occupy large portions of the country or to have Ukraine and the West acknowledge a change in the status of Crimea and the annexed Donbas.

In both cases, however, the United States decided to intervene indirectly by providing its clients with major military and diplomatic support, including the full-scale supplying of arms. Washington sought to help frustrate the more ambitious goals of a client of Moscow, Egypt in the 1973 war, and then those of Russia itself in the current conflict. The two wars were transformed from regional conflicts with deep historical and cultural roots into major geostrategic tests of will between the two superpowers. However, the difference is that in 1973, unlike in 2022, the United States didn’t pretend that it was leading a Wilsonian crusade, defending a democracy against a dictatorship, but rather admitted that it was trying, through its client state, to deliver a blow to its global rival, which is exactly what Washington is attempting to do now.

Indeed, U.S. military assistance allowed Israel to eventually halt Egypt’s attack, as well as an attack from Syria, another Soviet client. By the end of the war, Israel had advanced to positions some 101 kilometers from Egypt’s capital and occupied 1,600 square kilometers, cutting the Cairo-Suez road and encircling the bulk of Egypt’s Third Army, and was advancing toward Damascus in the north. Soviet military aid failed to change the balance of power on the battlefield, and leaders in Moscow threatened to intervene directly in the war, raising concerns that they would unleash a Third World War unless the Americans pressed Jerusalem to agree to a ceasefire that would halt the Israeli advances. That is what the United States did.

American diplomacy, led by Secretary of State Henry Kissinger, succeeded in avoiding a confrontation between the two superpowers, ending the war and achieving a ceasefire, and establishing the basis for a political agreement. Kissinger did so by ensuring that neither side, including Washington’s client state, would emerge as a winner. Instead, by helping to end what turned out to be a military stalemate, the United States was in a position to help the Israelis and the Egyptians get out of the mess they found themselves in by reducing the costs Israel had to pay for the lack of a diplomatic solution to the conflict and those Egypt faced for its failure to beat Israel on the military front. From that perspective, by assisting Ukraine, Washington and its Western allies will soon be in a similar position as the United States was at the end of the 1973 Mideast War, allowing their client state to halt an attack by an aggressor and bleed Russia on the battlefield without direct U.S. military intervention.

Yet, an American diplomatic win will come only if Washington takes advantage of the evolving military stalemate and the absence of any winner to reach a ceasefire and lay the foundations for a political agreement. As in 1973, an agreement will have to consider not only the interests of the United States’ client—supporting Ukraine's independence and ties to the West—but also those of the other side, integrating any solution into an agreement that recognizes Russia’s interests in Ukraine and perhaps creates the basis for a permanent strategic deal between Russia and the West.

Leon Hadar, geopolitical expert at RANE Network, a risk management consulting group, is the author of Sandstorm: Policy Failure in the Middle East.