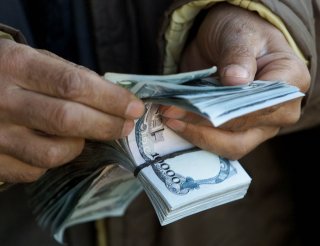 The afghani, the national currency of Afghanistan, has remained in circulation after the Taliban’s conquest of the country in August. The Taliban made early attempts to stabilize its value by curtailing Afghans’ ability to exchange it. In spite of their precautions, the currency has depreciated significantly in recent weeks, tumbling more than ten percent in a single day before briefly recovering some of its value, as uncertainty about Afghanistan’s future in the coming months has led to an economic crisis.

Afghanistan’s troubled economy, though already impoverished, survived prior to the Taliban takeover through generous foreign aid and humanitarian programs. In the aftermath of the group’s victory in the country’s twenty-year civil war, international aid dollars dried up, and the United States refused to allow the Taliban to access the funds owned by the previous government, led by President Ashraf Ghani. (Ghani himself was accused of stealing nearly $170 million from the country on his escape flight, a charge he vigorously denied.)

The consequences of the abrupt freeze in foreign aid have been significant, and have translated into economic worries in Kabul, the nation’s capital, as well as elsewhere. By most reporting, prices have gone up in urban areas, and commerce has decreased substantially as Afghans hold their money in expectation of harder times—or, more worryingly, attempt to convert it into foreign currencies, devaluing it. The afghani, which traded at roughly 80 to the dollar at the start of the 2021 Taliban offensive, rose to 90 after the Taliban entered Kabul, and increased from 110 on Sunday to 123 on Monday. The currency has now mounted a brief recovery, dropping to roughly 100 afghanis per dollar.

Khan Afzal Hadawal, a former governor of the country’s central bank, argued that the economy was “on the verge of full economic collapse,” warning of dire consequences if some level of aid from the Western world was not restored.

“We do understand the concerns of the international community” regarding funding the Taliban, the official acknowledged but suggested that it was a subordinate interest to the lives of Afghans.

“There are mechanisms [that] can help to manage the crisis and to assist the Afghan people,” he said.

The UN’s World Food Program has estimated that 23 million Afghans, or more than half of the country’s population of 38 million, are already facing food shortages. The country’s winter has set in, further reducing the country’s food supply and making it more dependent on foreign imports.

Though the Taliban have attempted to restore stability, the group is also partially responsible for the country’s growing list of economic woes; it has begun to purge the government of officials deemed loyal to the previous administration, replacing them with fighters and clerics who are loyal to the group’s leadership but who frequently do not have the skill set to run the country’s bureaucracy.