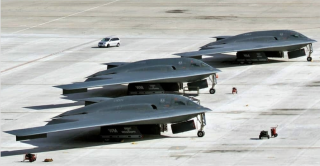 LRSO is the planned successor for the 38-year-old AGM-86 nuclear-tipped cruise missile carried by Air Force B-52 Stratofortress bombers since the 1980s. The seventy-six B-52Hs in Air Force service can carry up to twenty AGM-86Bs on two-underwing pylons and an internal rotary launcher in the bomb bay. The LRSO, however, will also be compatible with forthcoming B-21 stealth bombers, and potentially even B-2s should the Air Force keep them in service long enough.

Development of the LRSO began 2012 but was delayed by funding shortfalls for three years. Finally, in 2017 the Air Force gave Raytheon and Lockheed-Martin each $900 million to develop LRSO design concepts dubbed the YGM-180 and YGM-181, with a competition winner to be selected in 2022 and entry into service pegged for 2030.

The Air Force’s down-selection of Raytheon two years early comes as a surprise. The early decision may be more about industrial base management (balancing out defense dollars and orders across companies to keep them in business) rather than differences in capability between the proposed designs.

According to Breaking Defense, LRSO may cost an estimated $4.5 billion to develop plus $10 billion to procure a thousand missiles, resulting in a staggering unit price of $10 million per missile. Other sources offer similar numbers, while critics estimate total program costs of $20 billion or higher, though they may be lumping in roughly $7 billion projected to extend the service life by refurbishing W80-1 nuclear warheads to a more reliable W80-4 model.

Advocates for modernization of U.S. nuclear forces argue that cost is worth it because of the need to maintain a credible air-launched deterrence, and the likelihood that modern air defense systems may be able to detect incoming AGM-86B missiles from a distance. Furthermore, they argue that while B-2 and F-35 stealth jets can penetrate enemy airspace to attack with B61 nuclear gravity bombs, some targets may simply be too well-defended, and thus should be struck with stand-off range weapons.

But LRSO has also attracted controversy as a weapon seemingly designed for a surprise nuclear first strike, which may increase the temptation to initiate a nuclear conflict, as well as risk inadvertently inciting a nuclear attack from nervous adversaries.

When the AGM-86 Air-Launched Cruise Missile (ALCM) entered service in 1982, it had long been clear the Air Force’s fleet of huge B-52 bombers were unlikely to survive long attempting to penetrate modern Soviet air defenses. The hair-raising game plan in the 1970s was for low-flying B-52 to carry lots of smaller AGM-69 nuclear missiles to bulldoze a path of nuclear destruction through Soviet air defenses in order to reach the actual target.

When the AGM-86 entered service in 1982, it boasted a staggering range of 1,700 miles, allowing B-52s to launch nuclear strikes without having to get up close and personal with Soviet missiles and interceptors. Each 1.5-ton missile carried a W80-1 nuclear warhead with a yield adjustable between 5 and 150 kilotons. For comparison, the “Little Boy” bomb that devastated Hiroshima had a yield of 15 kilotons.

The AGM-86B model of the surface-skimming missiles uses a terrain contour mapping guidance system for navigation as its cruise at 550 miles per hour (roughly the speed of a 767 airliner) powered by an F107 turbofan engine on its spine.

But while surface-skimming cruise missiles are harder than airplanes to track and shoot down, their approach would still likely be detected, giving the Soviets time to seek cover underground, direct doppler-radar equipped MiG-31 interceptors to try to destroy them, and issue orders for a nuclear retaliatory strike.

Thus the Pentagon began developing a successor, the AGM-129 Air-launched Cruise Missile (ACM), which was basically shaped like an upside-down stealth jet. The AGM-129’s reduced radar cross section also allowed it to fly higher while remaining undetected, and thus out to greater range (2,300 miles) due to the lower density of friction-inducing air molecules at high altitude.

The nuclear-only AGM-129A was supposed to replace the AGM-86B entirely, but the Cold War ended in 1991 and with it the impetus to invest in strategic nuclear weapons. So after spending $6 billion on the program, the Air Force cut AGM-129 production early.

That left 450 AGM-129s alongside a larger arsenal of AGM-86s, including GPS-guided non-nuclear warhead variants (the AGM-86C and AGM-86D CALCM) which were used in aerial bombing campaigns targeting Iraq and Serbia from 1991 to 2003.

The AGM-129s proved less reliable and more expensive to maintain, so when it became necessary to reduce the number of nuclear weapons for strategic arms treaties, the Air Force decided to ditch the fancier stealth missiles and keep the AGM-86s. The non-nuclear CALCMs were also retired in 2019, their role subsumed by the AGM-158B JASSM-ER stealth cruise missile.

As Raytheon was the AGM-129’s manufacturer, it already has relevant experience in long-range stealth cruise missile design. However, the LRSO’s characteristics remain unclear. For example, it’s known the Air Force was considering both subsonic and supersonic-capable engine options, but it's unclear which direction has been embraced.

If the objective is to make a nuclear attack as lethal as possible, a stealth cruise missile helps because it may go undetected until far too late, giving personnel little or no opportunity to seek shelter or launch counterattacks.

But maximizing the deadliness of offensive nuclear forces may not necessarily maximize deterrence of enemy nuclear attacks.

To begin with, we have good reason to believe “winning” a nuclear war would only be a few degrees better than losing one because China and Russia have survivable nuclear arsenals. Even in the unlikely event that their land-based nuclear missiles and bombers were mostly wiped out in a first strike, there would always remain submerged ballistic missile submarines capable of launching dozens of nuclear weapons at metropolises and military bases across the globe.

And weapons that can strike with little to no warning are likely to have a destabilizing effect, increasing an adversary’s nuclear-paranoia. Afterall, if they believe they won’t see a first strike coming at their nukes until far too late, they may think their only choice is to attack first.

Adversaries may also jump the gun at faint “stealth” radar contacts—say one potentially produced by an F-35 stealth fighter or a non-nuclear JASSM missile—and fearing that they must “use it or lose it,” pull the trigger on a nuclear retaliatory strike without verifying whether they are genuinely facing nuclear attack.

In other words, fielding more unpredictable nuclear offense may increase the odds that the U.S. will be hit with nukes too—and arguably, disincentivizing such an outcome arguably should take precedence over any other national defense imperatives.

LRSO was also originally billed as coming with conventional (non-nuclear) variant, but Congress canceled that requirement in 2019. However, the Air Force claims it may develop conventional variant anyway. But fielding both nuclear and conventional versions of the same missile comes with the risk that a conventional attack could be mistaken for a nuclear strike, and thereby inadvertently elicit a nuclear riposte.

To be fair, the cat may already be out of the bag. Both Russia and China field dual-capable conventional/nuclear missiles, and Russia too has incorporated stealth technology into its Kh-101/Kh-102 air-launched cruise missiles.

Furthermore, if the B-52 is to retain a role in air-based nuclear deterrence in the coming decade (a necessity disputed by critics of LRSO), then it does require some kind of standoff-range cruise missile. However, arms control expert Hans Kristiansen has argued that conventional precision strikes using JASSM stealth missiles may obviate the need to resort to nuclear attacks.

The Pentagon’s re-investment in offensive nuclear capabilities is part of a broader global trend pursuing nuclear arms that can strike with less warning. Fundamentally, proponents of the LRSO believe that a scarier and more unpredictable offense will deter adversaries from ever initiating a nuclear conflict, while critics believe a nuclear arms race only increases the likelihood that such “first strike” weapons may eventually get used by both sides.