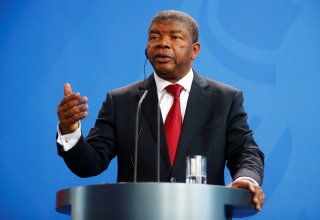 Angolan president Joao Lourenco praised the judgment of Angolan voters and committed to reforming the country’s economy during his second inauguration ceremony on Thursday, following a narrow victory over the opposition in Angola’s closest election since the end of its civil war.

Lourenco, who won his second five-year term last month, vowed in his inaugural address that he would be a “president for all Angolans.”

“Congratulations for the patriotism and high degree of tolerance, and civility shown in what are already considered the most disputed general elections in the history of the young Angolan democracy,” Lourenco said in his speech. “Angolans have demonstrated to the world that at crucial moments, they know how to make the best choices and choose the future of their country with great responsibility.”

Lourenco also emphasized the “continuity” and “stability” that his presidency—the third under the governing People’s Movement for the Liberation of Angola, or MPLA, since Angola’s independence in 1975—would continue to provide. Although the MPLA has historically been socialist-oriented and exercised a significant degree of control over the economy, Lourenco vowed that the country would undergo market reforms, expanding the private sector and reducing Angola’s astronomical youth unemployment rate.

UNITA, Angola’s main opposition party, has not accepted the results of the presidential election in August. Although the Angolan electoral commission’s official result gave Lourenco fifty-one percent of the vote against UNITA challenger Adalberto Costa Júnior’s 43 percent, the party has insisted that the vote had been marred by MPLA-sponsored voter fraud and the electoral commission could not be trusted to be independent. A court challenge to the results was rejected by Angola’s Constitutional Court in early September, paving the way for Lourenco’s second inauguration.

UNITA officials also protested the heavy security at the inauguration which they argued was intended to “intimidate citizens who want to demonstrate against the election results on the day of the inauguration of a president without legitimacy.”

In spite of its opposition, UNITA’s showing in the August election marked its most successful result since 2002, when the party abandoned armed violence against the MPLA and agreed to participate in electoral politics. For the first time, Júnior defeated Lourenco in Luanda, where many of the country’s urban poor have grown disaffected by the MPLA, and the party received ninety seats in Angola’s 220-member parliament against the MPLA’s 124, costing it its supermajority.