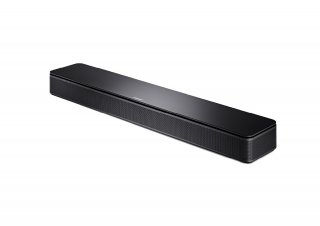 Earlier this year, during CES, Roku announced the Roku TV Ready program, which is aimed at allowing other electronics brands to make their “products work seamlessly with Roku TV models.” The first partners included TCL, which has long made Roku TVs, as well as Sound United, the company that owns respected audio brands Denon, Polk Audio, Marantz, Definitive Technology and Classé, and recently completed its acquisition of Bowers & Wilkins.

In September, TCL announced a line of Roku TV Ready soundbars, and Hisense, another company that has long been releasing Roku TV products, put out a line of its own earlier this month. Now another major electronics brand-Bose-has done the same.

The product is called simply the Bose TV Speaker, and it retails for $249.95. Bose describes the product on its website as “a one-step, simple solution for better TV sound. It’s small but powerful, delivering a clear, balanced, and natural-sounding audio experience that enhances dialogue and bass performance.”

Users can simply connect the speaker to participating Roku TVs with an HDMI cable, and that TV will then “automatically adjust internal settings for the new soundbar,” Roku said.

“At Roku, we know that great sound enhances the streaming experience, but we’ve also seen firsthand how challenging it can be for consumers to set up and control their audio systems,” Roku said when it announced the speaker was Roku TV Ready. “The Roku TV Ready program helps solve this problem by enhancing communication between the TV and soundbar, providing audio device manufacturers, like Bose, with the information needed to streamline set-up and ensure their product works even better with Roku TV models.”

Roku also said in the announcement that it is looking forward to expanding the Roku TV Ready program.

Roku announced a line of new products at the end of September, including several new players, and revealed that the AirPlay 2 capability would provide a workaround for the continued lack of availability of HBO Max on the Roku platform. The company also announced the Roku Streambar, and the arrival of the new Roku OS 9.4.

At the same time, TCL announced those Roku TV Ready soundbars, the highest-end of which, the Alto 9 Plus, comes with Dolby Atmos capability.

Roku may not still have a deal with HBO Max, but the company did reach an agreement last month to Comcast to make the Peacock streaming service available on the Roku platform.

As for Bose, it released a new flagship soundbar, the Bose Solo 5, earlier this year. Back in January, we called the Bose Solo 5 “the best soundbar on the planet.” It’s priced at $169.99, less than the cost of the Bose TV Speaker.