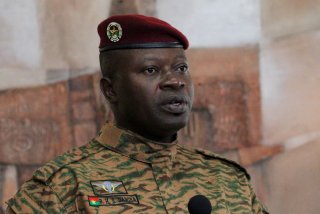 Paul-Henri Sandaogo Damiba, the leader of the military junta that deposed President Roch Kabore in January, agreed to resign his position after a second military junta overthrew him over the weekend.

“President Paul-Henri Sandaogo Damiba proposed his own resignation in order to avoid clashes,” Hamidou Yameogo, a spokesman for a group of mediators negotiating a settlement between the Burkinabe military factions, said. “[He resigned] in order to avoid confrontations with serious human and material consequences.”

Captain Ibrahim Traore, who led the new putsch, will likely succeed Damiba.  The outgoing military leader reportedly gave seven conditions for his formal resignation, including “a guarantee of his security and rights” and a promise of security for other members of the Burkinabe security forces who had supported him. Damiba also requested that Traore and his backers respect an earlier commitment he gave to the Economic Community of West African States (ECOWAS), in which he vowed to hold elections and return the country to civilian control within two years.

After Traore accepted Damiba’s conditions, he was sworn in as the country’s interim head of state. A statement issued by the new junta claimed that Traore would hold the office in a temporary capacity “until the swearing-in of the president of Burkina Faso designated by the nation’s armed forces” at a future date. However, this statement did not rule out the possibility that the military might formally designate Traore.

Although Damiba’s removal from power was largely bloodless, it came after prolonged unrest within the Burkinabe military and among the civilian population, which had previously protested against the first coup. On Friday, the second junta announced Damiba’s overthrow, but Damiba claimed that he had not been removed from power the following day.

The split within the military comes as Burkina Faso has lessened its ties with France, its former colonial ruler and traditional security partner after Paris voiced opposition to the first coup and called for a return to civilian rule. Instead, the country’s new rulers have sought closer cooperation with Russia, which has been more willing to engage with the military. Mercenaries from the Russian “Wagner Group” have been involved in Burkina Faso’s ongoing campaign against Islamist insurgents, leading to increasing concerns from the Western world about their conduct and lack of oversight.

On Saturday night, a group of anti-Damiba demonstrators attacked the French embassy in Ouagadougou, following claims that the former leader had sought closer accommodations with Paris. The French foreign ministry condemned the violence “in the strongest terms” and claimed a “disinformation campaign against us had caused it.”