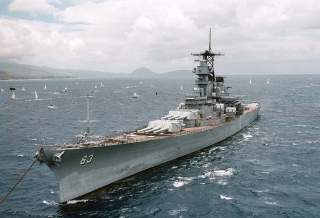 A future battleship could respond to Chinese provocations by disabling Chinese seabed sensors or cutting Chinese undersea cables. It could survive being rammed by enemy ships—a favorite tactic of the Chinese and North Koreans. And if A2/AD did escalate into a shooting war, it could operate in the danger zone while U.S. offensive actions turned the tables.

In World War II, the Japanese super-battleships Yamato and Musashi each mounted nine 18.1-inch guns, the largest naval guns ever deployed, but they never sank a single American ship. In a conflict decided by naval aviation, Yamato and Musashi were used mainly as flagships and troop transports. Despite their huge armaments, they were steel dinosaurs from an earlier strategic age.

But how do you sink a steel dinosaur? The answer is: "with difficulty." It took eleven torpedoes and six bombs to sink the Yamato. The Musashi took nineteen torpedoes and seventeen bombs. And at the time they were sunk, both ships were already limping along on patch-up repairs from earlier torpedo strikes. They may have been strategically useless, but the Yamato and Musashi were almost (if not quite) indestructible.