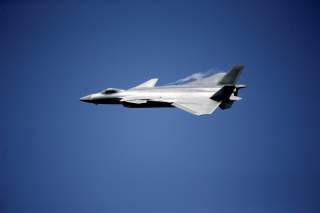 China hopes to have its next-generation Xian WS-15 afterburning turbofan ready for mass production for its new Chengdu J-20 stealth fighter, however problems remain for Beijing’s new engine. Once all of the defects have been corrected and the engine enters service with frontline J-20 squadrons, the new motor should significantly boost the performance of the Chinese stealth aircraft.

“The WS-15 is expected to be ready for widespread installation in the J-20s by the end of this year,” a Chinese military source told the South China Morning Post. The same source noted that the WS-15 still has “minor problems” which should be resolved once the engine had been more “extensively run in the aircraft.”

Sources disagree on the exact thrust rating of the WS-15, with estimates ranging from a low of 30,000lbs of afterburning thrust up to a figure of 44,000lbs of afterburning thrust. A prototype version of the WS-15—which has been in development since the 1990s—is known to have generated 36,000lbs of thrust and projections at the time suggested that an operational version of the engine would produce 40,340lbs of thrust—and it would have three-dimensional thrust vectoring capability.

The South China Morning Post reports that the WS-15 has a thrust to weight-ratio of more than ten-to-one, which—if true—is comparable to Pratt & Whitney’s F119 and F135, which power the Lockheed Martin F-22 Raptor and the F-35 Joint Strike Fighter respectively. However, while the Chinese engine might produce thrust levels comparable to the American motors, the WS-15 falls far short on durability with less than half the time before overhaul.

The outstanding question about the WS-15 remains the same however. While the Chinese have demonstrated the ability to build sophisticated jet engines with single crystal turbine blades under laboratory conditions, Beijing’s efforts at mass producing reliable jet engines is extremely spotty. The WS-15 has had a particularly difficult gestation period and it remains to be seen how well the engine does once flight-testing starts in earnest.

“The WS-15 engine designed for the J-20 exploded during a ground running test in 2015,” a Chinese military source told the SCMP. “The explosion indicated the WS-15 is not reliable, and so far there is no fundamental solution to overcome such a problem … that’s why the J-20 is using WS-10B engines now.”

All of the Chinese J-20s observed thus have been equipped with either the Russian Salyut AL-31FN or the WS-10B. “Using the WS-10B engines is just a temporary, expedient stage of the J-20’s engine development … in the future, the aircraft may use another new engine, the improved performance engine (IPE) version of the WS-10, the WS-10 IPE, until the development of the WS-15 is successful,” a Chinese military source told the SCMP earlier this year. “It’s so embarrassing to change engines for such an important aircraft project several times … just because of the unreliability of the current WS-15 engines. It is the long-standing core problem among home-grown aircraft.”

Beijing is more than aware that it will need to ensure the reliability of the WS-15 before the J-20 can truly enter into full-rate production. “China currently has about 20 J-20s, which is far from enough,” a Chinese military source told the SCMP. “[Having] a home-grown engine is a must for the J-20 to enter mass production, as no other country would be prepared to give China such cutting-edge technology.”

Beijing believes it needs to have an operational force of more than 200 J-20 aircraft ready by 2025 to counter what China sees as the threat posed by the roughly 300 plus American F-35 stealth fighters it believes Washington will deploy to the region.