Could Donald Trump Launch His Very Own Operation Desert Fox? 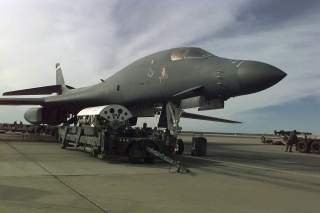 A scandal-ridden presidency plus talk of impeachment, combined with rising tensions with a Persian Gulf country hostile to the United States has some asking if the year is 1998.

Curt Mills refers to air strikes on Iraq in December of that year as an example of what the Trump administration could attempt to execute against the Islamic Republic of Iran should the campaign of economic pressure against Tehran fail to yield favorable results or leads the theocratic regime to violently lash out in response. Paul Pillar considers the possibility Trump may order such an attack to disrupt the political forces threatening his presidency, the same way many of Clinton’s critics accused Number 42 of using military action to buy himself time.

There are some parallels and while history does not exactly repeat itself, it can certainly rhyme. But does 1998 serve as an appropriate model for understanding current events? To understand why the air strikes, codenamed Operation Desert Fox, occurred and why they did when they did, they must be viewed within the broader context of the U.S.-Iraq “war between the wars.”

It is often forgotten that, despite the U.S.-led Coalition’s resoundingly successful liberation of Kuwait during Operation Desert Storm, the fighting never stopped; it only dialed down in intensity. Between the end of Desert Storm in February 1991 and the beginning of Iraqi Freedom in March 2003, Washington and Baghdad were embroiled in a military stand-off that routinely led to shooting. Two no-fly zones, one in the north plus another in the south of the country, were both established by summer 1992, along with an economic embargo, all enforced through the United Nations.

Saddam Hussein, the late Iraqi dictator, ceaselessly defied international pressure and was not afraid of living on the edge. United States and coalition military aircraft patrolling the no-fly zones were often fired upon, drawing retaliatory responses for the violations. In October 1994, Iraq appeared ready to invade Kuwait once again, resulting in another major Coalition deployment to the region that successfully deterred Baghdad. Attacks on the Kurdish minority in northern Iraq led to punitive action in September 1996 and an expansion of the southern no-fly zone.

By 1997, it seemed Saddam was weathering the storm and greater urgency was felt in Washington to bring Iraq to heel. Significant emphasis was placed on ensuring Iraq did not acquire weapons of mass destruction, as Iraq was both failing to comply with disarmament mandates under UN Security Council Resolution 687 and obstructing inspections. Saddam was also threatening the U-2 surveillance flights that were critical to monitoring Iraqi activities. With the threats reaching a critical level in fall 1997, the Clinton administration pursued a more aggressive strategy, including the development of harder-hitting military options to be triggered in response to a threat against or a loss of a U-2. Facilitating this change in approach was made easier by appointing interventionist-minded advisors such as Secretary of State Madeleine Albright and National Security Advisor Sandy Berger for the second term. In somewhat similar fashion, the Trump administration’s more confrontational stance towards Iran coincided with the appointment of the hawkish John Bolton and Mike Pompeo as National Security Advisor and Secretary of State, respectively.

The renewed emphasis on preventing Iraqi acquisition of WMDs and defending the U-2 flights was the genesis of the showdown that would culminate in the December 1998 strikes. From fall 1997 to winter 1998, Saddam engaged in a series of “cheat-and-retreat” episodes in which, as described by analyst Michael Knights, “the United States would be drawn into expending political capital at the [United Nations Security Council] and carrying out costly military deployments to the Gulf, but Saddam would back down shortly before the United States resorted to the use of force.” While this strategy was not new, Iraq’s dictator employed it with greater frequency during the aforementioned one-year period.

The new war plans for use against Iraq were consolidated under the codename Desert Thunder. A tremendous multinational military presence was established in the region, constituting thirty-five thousand personnel and included a strong ground force element in addition to air and naval power that had thus far served as the vanguard of the containment regime. It was an understatement to describe the deployments as formidable; at one point, there were two hundred aircraft in-theater, including stealth fighters and strategic bombers, and, by February 1998, the United States had three carrier battle groups in the Persian Gulf. Costly as it was, the major show of force convinced Saddam to de-escalate the situation and cooperate with the UN.

It was also around this time the Monica Lewinsky story first broke. By now, the latest showdown with Iraq had been underway for a few months. With Baghdad seemingly back in compliance, the crisis subsided for the time being and attention turned to the sex scandal, which went on to dominate headlines well into 1999. Operation Infinite Reach, the August 1998 cruise missile strikes on Afghanistan and Sudan in retaliation for the American embassy bombings by terrorists the same month, was the only other major military action of the year, though this is where the Clinton administration was first accused of concocting a military crisis to distract from the Lewinsky affair.

Eventually, Saddam displayed his true colors. When inspectors reported possible violations in late summer, Iraq kicked them out, bringing the crisis to the brink of armed conflict once again. In the fall, Iraq again buckled and again agreed to cooperate, but Washington and the world’s patience had worn thin. It was all but decided the next “cheat-and-retreat” would be the final straw. In November, Iraq retreated, and an attack codenamed Desert Viper was given the go-ahead. Planned for November 11, bombers were in-flight, cruise missiles minutes away from launch, and aircraft about to fly off the deck of a carrier, when the operation was aborted. Iraq had, again, acquiesced and committed to unconditional compliance with inspections.

A month later, Iraq proved dishonest again and Washington had had it. From December 16 – 19, U.S. British, and French forces unleashed Desert Fox. For four days, the Coalition struck Iraqi weapons development facilities, barracks, air defenses, and even the ruling Ba’athist Party headquarters. Close to one hundred targets were hit with cruise missiles and ordnance dropped by fighters and bombers. Until the 2003 invasion, Desert Fox was the largest air operation in Iraq since the 1991 war. On December 19, the strikes ended, and President Clinton was impeached the same day. Once more, accusations the operation was intended to distract from the president’s political troubles filled the air.

The timing certainly makes it worth considering the possibility Clinton exploited a crisis to relieve some pressure off his back. But upon closer examination, the December 1998 strikes were merely a step up the escalation ladder that led to eventual regime change. By the time Monica Lewinsky became a household name, the United States had already expended considerable financial and political resources trying to curb Iraq’s transgressions. This is where the “Wag the Dog” references fail—the theory postulates a manufactured crisis, which the U.S.-Iraq crisis clearly was not.

Iraq was not backing down, so it was only inevitable the United States would eventually have to follow through on its threats to strengthen deterrence and maintain credibility of the containment regime. Failure to do so would have handed a major strategic victory to Saddam Hussein, who had already proven effective at walking the tightrope. Lastly, the Clinton administration was still addressing the perception of being weak on foreign policy. Refraining from delivering a forceful blow against Baghdad would have added to Clinton’s political woes and he already had many, to say nothing of an impending impeachment.

Belief that President Trump would order an attack on Iran in 2018 stems from his temperament and the perception he does not play by the same rules as his predecessors. But for all his quirks, Trump appears somewhat reluctant to use the “big stick,” let alone brandish it. Though he has doubled down on America’s present interventions in Afghanistan, Iraq, Syria, and Yemen, they do not constitute dramatic escalations in the use of military power. What actions the administration has taken, such as the intensified air wars against the Islamic State and the Taliban, appear to be concerted attempts to achieve already-established limited objectives and facilitate American withdrawal. Other actions, such as the two punitive strikes against the Assad regime in Syria, seem symbolic; aimed at upholding international norms against the use of WMDs and a reminder that the U.S. is willing to use military force when it feels justified in doing so.

Despite a willingness to pick fights with just about anyone, there is one party Trump appears reticent to lock horns with—the Pentagon. In the absence of a clear and obvious casus belli, it is all but assured Secretary of Defense Jim Mattis and perhaps CENTCOM will advise against such drastic action. Amid political turmoil, the worst thing Trump could do is create the impression those charged with protecting the country, to include the NSC, are at odds with the Commander-in-Chief. This is yet another reason why 1998 and Desert Fox are inappropriate models—despite the president’s other problems, Clinton, the NSC, and the Pentagon were mostly on the same page when it came to Iraq. By comparison, the Trump administration appears between strategies, with officials insisting regime change is not in the cards, while others unofficially associated with the White House are pushing for that very outcome.