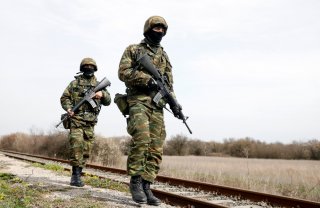 Since 1952 Greece and Turkey have been de facto allies—for no other reason than both countries are members of NATO. Relations between the two nations have been marked with periods of open hostility since Greece won its independence from the Ottoman Empire in 1830, and in the past one hundred and ninety years the two nations have fought four rather major wars.

While the countries had a period of “good” and almost “friendly” relations in the 1930s and 1940s, relations have declined considerably in recent years and are now at the lowest point since the 1974 Cypriot coup d’état which was followed by the Turkish invasion of Cyprus which left the island nation divided.

The current hostilities are rooted in the Balkan Wars of 1913, which gave Greece all of the Aegean islands except Imbros and Tenedos. Many of the small islands are barely more than three nautical miles off the Turkish coast, and since the end of the Second World War, Turkish officials have called for a delimitation of territorial waters, air space, and other related zones of control. The issue has been renewed and the two nations are at an impasse due to energy reserves including the discovery of natural gas in the Eastern Mediterranean waters.

Both countries claim the waters and seabed off some of the islands, which can be as much as 22 hours by ferry from Athens yet are within visual range of the Turkish coast.

In August, Ankara dispatched a seismic vessel to survey the seafloor for hydrocarbons reportedly near the bitterly contested Exclusive Economic Zone (EEZ) claimed by Cyprus.

If the situation in the Mediterranean isn’t bad enough, there is another crisis brewing in the Caucasus as Armenia and Azerbaijan entered into open warfare earlier this month. As The Federalist reported, this is at the historic fault line between traditional European Christendom and the Ottoman frontiers.

France and Russia have unsurprisingly shown support for Armenia—Russia has an airbase in the country—while Turkey, which has increased in a policy of neo-Ottomanism under Recep Tayyip Erdoğan’s rule, has thrown its support behind Azerbaijan.

While it is unlikely that France could get dragged into a war in the Caucasus, the situation between Greece and Turkey is so bad that on Monday NATO Secretary-General Jens Stoltenberg voiced hope that an agreement by Athens and Ankara to avoid potential military tensions could lead to diplomatic negotiations and perhaps allow the two to settle their longstanding differences.

NATO even hosted a set of technical talks between the two nations—and that resulted in an agreement on a military “deconfliction mechanism,” which included the setting up of a hotline between Athens and Ankara.

“The deconfliction mechanism can help to create the space for diplomatic efforts,” Stoltenberg said during a joint news conference with Turkish Foreign Minister Mevlüt Çavuşoğlu. “It is my firm hope that the underlying disputes can now be addressed purely through negotiations in the spirit of allied solidarity and international law.”