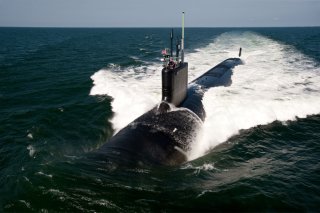 The deployment of a squadron of nuclear-powered attack submarines—also known as Submersible Ship Nuclear (SSN)—near the coast of India and throughout the Indian Ocean represents a potential threat to the regional ambitions of the Chinese Navy. Diesel-electric submarines are less expensive and more suited for coastal defense but SSNs are a considerable investment for India’s meager defense budget.

The Indian government authorized the construction of six nuclear-powered attack submarines in 2015. Construction is expected to begin next year and the first submarine is slated to enter service in 2032. The Indian Navy recently operated a single Russian Akula-class attack submarine, the INS Chakra, on a ten-year lease.

Different fleets demand different submarines. The U.S. Navy favors nuclear submarines due to their infinite endurance even though they are more expensive. A combination of diesel and nuclear submarines is an efficient answer for Russia and China, which occasionally conduct operations offshore but prioritize coastal defense and activities closer to land.

It makes sense for India to equip its submarines with nuclear propulsion systems so that they will not be surprised by an attack when they are docked; India does not want to be caught off guard. However, the 2020 defense budget was only $70 billion, significantly lower than China’s budget of $193 billion. India’s defense resources are already being cut even though China and Pakistan present potential dangers on numerous fronts.

Experts suggest that New Delhi will either need to lower its spending on other military investments or earmark additional monies to develop SSNs. India is now debating if it needs an extra aircraft carrier or if SSNs will suffice.

Two arguments run counter to this logic. First, conventional submarines will be more expensive to acquire and operate in the future, considering the recent Australian experience with the French submarine construction program. They may not be as costly as nuclear submarines but they might be closer to that in acquisition and cycle maintenance. Nuclear submarines come at a premium price but provide unparalleled deployment and strategic value. Second, part of India’s SSN costs are already being absorbed by the six conventional submarines it was supposed to build in the future.

In addition to Chinese expansion, the AUKUS pact between the United States, the United Kingdom, and Australia is a cause for concern. Indian security experts are concerned about the decrease in the Indian Navy’s conventional capabilities given the prospect of Australian nuclear submarines operating in the region. After all, growth in the number of Australian submarines in the Indian Ocean will weaken India’s local influence and authority.

India has a distinct perspective on the geopolitical geography of the surrounding area, in contrast to the viewpoint held by the United States regarding the “Indo-Pacific region.” For India, the Indian Ocean is more significant than the Pacific Ocean which, from India’s perspective, is where the competition between the United States and China is taking place. According to India, the “Indo-Pacific” region can be found from the Middle East to the east coast of Africa. New Delhi considers itself the dominant power in the “Indian” portion. Indians place significant importance on the Pacific Ocean since it might become a potential source of danger and unpredictability for the region.

This may further fuel the Australian-Chinese rivalry in the Indian ocean. Indian security analysts are concerned that the AUKUS initiative will irritate the Chinese government, leading Beijing to increase its naval activities from the South China Sea to the Indian Ocean. It is possible for China’s naval forces to partially relocate some of their operations to the eastern part of the Indian Ocean. Indian Navy leaders will be forced to change their plans in response to the significant increase in China’s naval presence. For instance, as a response, India might be forced to deploy a portion of its naval forces in the South China Sea to maintain a sense of balance. However, this will only further worsen relations between India and China.

There are about 130 nuclear submarines currently on active duty in the world’s navies. India only has one, in comparison to China’s twelve. India presently has two ballistic missile-firing submarines, or Submersible Ship Ballistic Missile Nuclear (SSBN). It is expected to operate three Arihant-class SSBNs in the short term. However, SSBNs cannot be used in place of SSNs, which is a “fast attack submarine” that uses torpedoes to strike enemy targets.

By contrast, an SSBN must be safeguarded by an SSN or other assets, although it carries torpedoes for self-defense because it often carries land-attack missiles with nuclear warheads. Both the SSN and SSBN rely on nuclear reactors for their electricity. So, in 2019, New Delhi and Moscow agreed to lease the Chakra-3 submarine for $3 billion. Chakra boats have cruise missile firing capabilities. Yet, due to China’s growing naval presence and the delays in India’s nuclear submarine project, India will need as many submarines as it can get its hands on.

At the same time, India does not intend to rely solely on partners from other countries when constructing its nuclear submarine fleet. New Delhi wants to create its own technology.