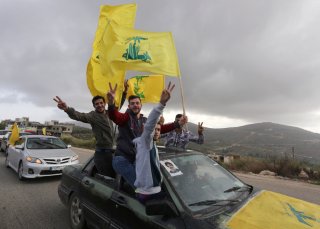 During Lebanon’s 2019 protests, citizens took to the streets to demand change. The main slogan was “kelloun yaane kelloun,” which translates to “all of them means all of them,” a reference to the warlords-turned-politicians who have ruled Lebanon since the civil war in the 1970s. While some protesters were demanding economic reforms, others were targeting the entire system and focused on Hezbollah, or what is often referred to as the Iranian occupation of Lebanon. Civil society groups frequently demanded “early elections,” which did not happen. More than two years later—after two governments, a pandemic, the collapse of the Lebanese lira, and an explosion that destroyed the capital—elections are finally happening on time. Expats voted on May 8, and locals will vote this Sunday.

Elections are perceived as the tool that can change the corrupt elite that has ruled the small, once-prosperous Mediterranean country, turning it into an open-air prison where misery, oppression, and poverty are rampant. Nonetheless, elections should not be seen as the panacea that will save the country.

Elections do not equal democracy. They are an important component but do not define it. Basic features of a real democracy include freedom, the rule of law, and sovereignty.

Lebanon passed from a “hybrid regime” to an “authoritarian regime” in 2021, according to the Economist’s Democracy Index. Freedom House considers Lebanon only partly free, and the country is plagued by corruption. Most importantly, Lebanon has a sovereignty problem—it is always the target of malign interference. After a Palestinian invasion triggered a civil war, a Syrian occupation, and Israeli invasions, Lebanon is now under an Iranian occupation by proxy. Elections in this context and environment have a limited capacity of inducing positive change.

During the 2018 parliamentary elections, the Lebanese Association for Democratic Elections recorded thousands of election violations. It also reported 222 cases of intimidation or coercion on electors inside or near the polls. The current elections will not be immune to that.

Lebanon has a history of political oppression and assassinations. Last year, anti-Hezbollah activist and thinker Lokman Slim was assassinated, with no one held accountable for his killing. Moreover, it is important to understand the environment in which activists operate in Lebanon. Last month, many candidates had to withdraw from the elections after being pressured by Hezbollah and the Amal party. In 2018, the Lebanese Forces surprised Hezbollah by winning a seat in Baalbeck, its stronghold. This year, the Iranian-backed movement is trying to prevent this from happening again. When a sheikh in Baalbeck was urging voters to vote freely, gunmen started shooting to terrorize them. “Hezbollah is trying to terrorize us because it is afraid of a Shiite breakthrough,” the sheikh told L’Orient-Le Jour.

Beyond these issues, clientelism in Lebanon is rampant. Many candidates offer voters money, services, or resources in exchange for their votes. Vote-buying favors traditional parties, as they have more resources from years of embezzling public resources and their foreign funders.

On the other hand, opposition parties have failed to unite. Independent candidates will win seats in the elections, but they will not receive enough to change the traditional political class. The most realistic positive outcome is the anti-Hezbollah bloc gaining the majority in parliament. It wouldn’t be the first time that the bloc has done so. In 2009, the March 14 coalition secured around sixty-eight seats in the 128-member parliament. Many were enthusiastic about an anti-Syrian government and anti-Hezbollah coalition gaining a majority, but the result was corruption, compromises, and Hezbollah getting stronger. This time, while Hezbollah may not directly lose seats, its allies will. The popularity of the Free Patriotic Movement (FPM), the Christian party that backs Hezbollah, is in decline, and it is expected to lose more seats. On the Sunni side, former prime minister Saad Hariri retired from politics and asked his supporters to boycott the elections. Hariri is accused, like most Lebanese politicians, of corruption and of making concessions to Hezbollah. Nonetheless, many in the Sunni community, including his former supporters, will vote in the elections, opening the door for new faces.

While the prospects for an anti-Hezbollah coalition being formed are promising, traditional parties still dominate the political scene in Lebanon. The main reason for this is the political system, which makes the people of Lebanon vote for the same politicians that have destroyed their country. Almost every citizen is extremely critical of the regime, but many still vote for the same faces during the elections. This is due to the Taif system, which has recycled the warlords and kept them in power for decades, putting voters in a blame-shifting loop. Officially known as the National Reconciliation Accord, Taif was a compromise between many groups that ended the civil war in 1989 and was intended to address the country’s problems and restructure the political system. But the sectarian power-sharing system is conducive to a lack of sovereignty and corrupt rule. Politicians oppose changing it because it protects their status and hegemony.

The protesters’ calls of “kelloun yaane kelloun” will only be feasible when there is a new system based on decentralization or federalism. Such a system can reorganize the coexistence between the different communities in Lebanon, pushing each community to hold its politicians accountable instead of blaming other communities for every problem.

Until then, new faces will be handicapped by the system, and reforms will be minimal. And if a coalition makes a decision Hezbollah doesn’t approve of, the militia will not be afraid of taking its weapons to the streets, even if it doesn’t have a parliamentary majority. When Hezbollah cannot weaponize laws and the government, it can use its old Kalashnikovs to spread fear and terror. Real change is impossible as long as Lebanon is locked in the Taif system and Iranian weapons threaten its sovereignty.

No matter the outcome, immunity, corruption, oppression, and theft will still exist after the elections; indeed, these issues will be legitimized by the vote. In 2020, French president Emmanuel Macron visited Lebanon after the massive port explosion destroyed Beirut and no one was punished for it. Desperate citizens asked Macron to help them get rid of their politicians. The French president shifted the blame and said, “You voted for them.” The international community did not punish the regime for its crimes, making it complicit in feeding the neo-patrimonial government.

Elections allow the Lebanese regime to commit crimes without international backlash because, in the eyes of the world, these politicians were legitimized through a “democratic” tool, and it is not the role of international actors to punish them if Lebanese citizens are still voting for them.

The people of Lebanon are hostages to a rigged system and militias. Elections alone cannot free them.

Romy Haber is a Lebanese freelance journalist and Master's student in International Security Studies. She focuses on non-state actors and minorities in the MENA region. You can follow her on Twitter @Romytweeting.