To End the War, NATO Must Push Ukraine to Negotiate with Russia 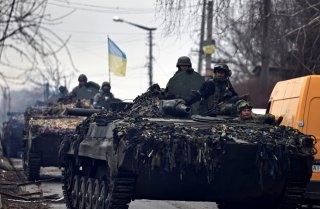 In his press conference in Tokyo on May 23, President Joe Biden said that Russian president Vladimir Putin must “pay a dear price” for his barbaric behavior in Ukraine. That may mean a decisive defeat of Russia, as Poland, Estonia, and other Eastern European members of NATO have urged. It may also mean a restoration of Ukraine’s borders, including Crimea, as President Volodymyr Zelenskyy and other Ukrainian officials are now demanding, as well as the imposition of reparations on Russia for its wanton destruction and crimes against humanity.

Such retributive justice would be condign punishment for Russia’s unprovoked invasion. But would it be worth the cost of more carnage in Ukraine, the possibility of a wider war in which chemical or tactical nuclear weapons might be used, further disruption of the world economy, and renewed European polarization?

In contrast to Russian casualties, only some 3,000 Ukrainian soldiers have died in the war, according to Kyiv. But thousands more civilians have perished, including 10,000 in Mariupol alone. The war has also ravaged Ukraine’s infrastructure and, although precise figures are hard to quantify, the Kyiv School of Economics estimates that the aggregate damage is approaching $100 billion. Even if the war ended tomorrow, the International Monetary Fund reckons that the Ukrainian economy will contract by 35 percent this year.

Amply supplied with arms from the United States and its NATO allies—artillery, Javelin anti-tank missiles, Stinger anti-aircraft systems, drones, and now the M777 howitzer—Ukrainian leaders and military commanders are increasingly confident of victory over the Russian invaders. Buoyed by supportive rhetoric from NATO members—such as calls from U.S. political leaders to weaken Russia and persevere until victory is won and the Estonian prime minister’s declaration that “peace can’t be the ultimate goal”—Ukrainian officials have pleaded for even more lethal weapons.

NATO’s transfer of more advanced weapons, however, could also be self-destructive. Having lost the Cold War in 1991, a paranoid Putin may resort to the use of chemical or tactical nuclear weapons to avert a second humiliating defeat by NATO. A strike against the territory of Poland or one of the Baltic states, as Biden has promised, would invoke NATO’s collective defense clause in the Washington Treaty and expand the war precariously beyond Ukraine.

Even if confined to Ukraine, however, protracted warfare will further roil the world economy and financial markets already weakened by Covid-induced supply chain disruptions. The cost of energy has risen dramatically in the past three months. This has contributed to higher inflation and rising interest rates, which are raising the cost of servicing foreign debt in developing countries. Reduced supplies of wheat from Ukraine and Russia have also sent prices skyward, posing a challenge for poor countries in Africa and South Asia to feed their people and maintain social order.

In addition to these dire social, economic, and military consequences, continued warfare will erode the possibility of creating a peaceful and stable Europe. Having come to the defense of Ukraine, the United States and its allies must persuade Kyiv to bring this war to an end, including by imposing limits on further military aid as leverage. A Ukrainian military victory is not in the cards, and a negotiated outcome is the only realistic goal. To achieve it, Zelenskyy and his advocates in Eastern Europe and the Baltic states must accept that Ukraine will be a neutral state and that it will concede to Russia the Donbas oblasts of Donetsk and Luhansk, as well as Crimea. Given the sentiment of Russian separatists in the Donbas, retaining the region would be fraught with continuing tension in the future.

The accession of territory in the Donbas would help bring Russia to the negotiating table. As odious as Putin is, the focus of peace talks should be on restoring European stability rather than treating Russia as a pariah, which would be politically and militarily counterproductive. As part of a broader peace settlement, NATO should agree to open an ongoing dialogue with Russia on mutual security concerns encompassing military deployments and exercises in countries bordering Russia and its Kaliningrad enclave on the Baltic Sea. In exchange, Russia must withdraw its forces from Ukraine and pay part of the cost of rebuilding the country. Given the toll Western sanctions have taken on its economy, however, Russia cannot be expected to pay the lion’s share. Finally, along with other countries participating in a peace conference to end the war, Moscow must also guarantee Ukraine’s security and accept the presence of NATO forces in countries on its borders, including Sweden and Finland, as a safeguard against a third invasion.

Among other assignments, Hugh De Santis was responsible for NATO, East-West relations, and arms control on the Policy Planning Staff of Secretary of State George Shultz. He later directed the European Security Program at Carnegie Endowment for International Peace and chaired the Department of National Security Strategy at the National War College.