Eye in the Sky: Can F-35 Stealth Fighters Take Out ICBMs at Sea? 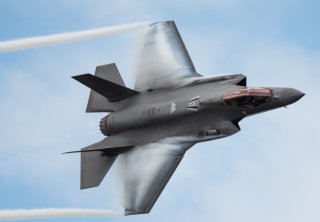 F-35 Joint Strike Fighters may be able to bring new capabilities to missile defense by filling a needed niche or, at the very least, greatly supplementing existing land-based systems. Unlike many offensive nuclear deterrents, U.S. anti-ballistic missile defense systems are primarily land-based. For instance, a Ground-Based Interceptor (GBI) stationed at Ft. Greely, Alaska, would fire up into space during the middle phase of an intercontinental ballistic missile’s (ICBM) flight to intercept the threat. This presents a number of challenges, as GBIs need sensors or embedded technology to distinguish decoys from actual ICBMs. This is the reason behind the Pentagon’s emerging Next Generation Interceptor, a system designed to both detect and destroy multiple incoming missiles or decoys traveling through space. Multiple kill vehicles, as they sound, integrate a number of interceptors into one missile. This technology primarily aims to ensure that ICBM decoys cannot undermine American missile defense systems in the event of a nuclear strike.

Regardless, identifying and knocking out large numbers of ICBMs is, by any estimation, a challenge. A single launch—even from a rogue state with a limited ICBM arsenal—presents a much more manageable threat for Ground-Based Interceptors. An incoming salvo of ICBMs, by contrast, is a totally different equation. This means that two crucial strategies may be needed to counter future ICBM threats. First, the U.S. nuclear triad will serve as a powerful deterrent capable of stopping a first strike from ever happening by ensuring a catastrophic retaliation. The second strategy features a range of advanced defensive measures, including satellites, lasers, multiple kill vehicles, or even F-35 fighters.

While destroying ICBMs is quite different from tracking or intercepting short- or medium-range ballistic missiles, the F-35 is already being developed to take these threats head-on. The Navy has successfully tested the F-35 as an integrated aerial node for the Naval Integrated Fire Control-Counter Air (NIFC-CA) architecture. The NIFC-CA architecture uses ship-based Aegis radars, an aerial sensor node, and a guided SM-6 missile to knock out attacking missiles from beyond the horizon. Since its inception, the NIFC-CA system has used an E-2 Hawkeye surveillance plane as the aerial node. Now, the system can turn to far more capable F-35 fighters as the aerial sensor.