The F-35 Strengthens Its Role in Missile Defense 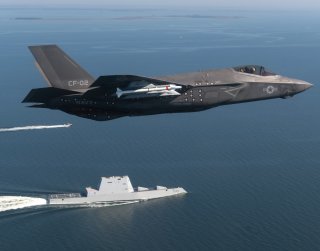 The Lockheed Martin F-35 Lightning II stealth fighter jet is well known for stealth, reconnaissance, precision attack, and high-speed computing. But what about missile defense? The idea might initially seem peripheral given the heavy space and land-launched interceptor dimensions to missile defense. Yet the military services are increasingly leveraging the F-35's long-range, high-fidelity sensing technology, computing, and networking capacity to support integrated air and missile defenses.

By developing the F-35 for missile defense, the Pentagon is expanding the mission envelope and operational functionality of the aircraft in less recognized areas that often linger beneath the radar, associated with budget, cost, and sustainment concerns.

The primary function is multi-domain, given that the F-35 has now on several occasions been successfully used in tests as an aerial “sensor node” or gateway system connecting air, ground, and maritime fire control and command and control nodes.

Last Summer, for instance, the F-35 was used to relay target information to a ground-based Patriot missile interceptor as part of an integrated, meshed network of sensor nodes architected to track and exchange threat data across otherwise disconnected nodes. The F-35 was used as an “elevated sensor” or an aerial node at White Sands Missile Range, New Mexico, to track and help destroy a surrogate cruise missile target. The event was part of the Army’s Integrated Battle Command System (IBCS) program. The Army’s fast-developing IBCS program, in development for several years, consists of a series of interconnected dispersed radar and sensor nodes across a wide area of operations. The concept is to not only network key ground defense and targeting nodes such as a Sentinel Radar with a Patriot missile system, but also expand to incorporate a multi-domain functionality.  In this capacity, an F-35 can use its sensors as a multi-domain node to discover, track, and pass along target details to ground radar nodes from beyond the horizon.

This is exactly how the F-35 was used with the Patriot. The benefit is clear, in that faster, multi-domain networking and threat tracking information affords commanders more time and opportunity through which to perform time-sensitive command and control functions. Specifically, should a ground commander learn of an otherwise undetectable threat approaching from beyond the horizon due to an F-35, more effective decisions can be made regarding which interceptor to use or how best to respond or launch a counterattack. The speed of information flow and data processing can be the difference between success or failure in a mission.

Using an F-35 in this capacity is not necessarily new, as the Navy has been doing it for several years as well through its integrated ship-defense warfare network called Naval Integrated Fire Control—Counter Air (NIFC-CA). NIFC-CA, which has been deployed on Navy destroyers for several years now, connects ship-based fire control and radar systems with an aerial “gateway” node to detect approaching anti-ship missiles from beyond its radar horizon or “field of regard.”

The NIFC-CA program began by using the Navy’s well-known Hawkeye surveillance plane. However, during the course of the Navy’s development of NIFC-CA, an F-35 was used as the aerial gateway “node,” NIFC-CA involves some interesting multi-domain networking somewhat analogous to how the Army used the F-35 with the Patriot. The aerial sensor node finds a track from beyond the radar horizon of a surface ship, relays the data back to ship-based radar and fire control which then launches an SM-6 interceptor missile to track and destroy the approaching enemy anti-ship missile at much safer stand-off distances. Due to the use of an F-35 in this capacity, ship commanders can have a much longer and more substantial time window through which to determine an optimal tactical response to the attack.