In a First, Russia Reportedly Targets Israeli Fighters Over Syria 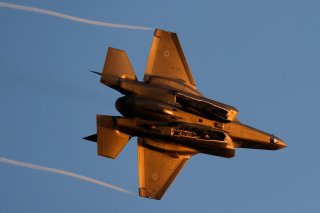 Russian ground forces may have fired missiles at Israeli aircraft flying over Syria, signaling a potential escalation in the country’s conflict, according to Newsweek.

The Newsweek report quoted Israel’s Channel 13 news station, which alleged that Russian missiles had been launched at Israeli aircraft within Syrian airspace on Friday, May 13. It added that it was “not … able to independently verify whether the attack did take place and whether it was the act of Russian forces.”

According to the Channel 13 report, Russian forces in southwestern Syria—near the city of Damascus and the contested Golan Heights territory, which Israel formally annexed in 1981—fired missiles from an S-300 anti-aircraft system during a series of airstrikes against Syrian targets by Israeli aircraft. Syria’s state-run SANA news agency claimed that at least five people had been killed in the airstrike and seven had been wounded. SANA provided no additional information on whether the casualties had been civilians or combatants in the country’s decade-long civil war.

While Syria owns its own S-300 systems, they are operated by Russian soldiers and cannot be fired without permission from the Russian military, meaning that if an S-300 was fired, it was almost certainly fired with Russian approval. Russia’s S-400 systems, an upgrade on the S-300, are also present in Syria, but they have been made expressly off-limits for use unless Russian troops are in danger.

The S-300 missiles were not reported to have hit or locked onto Israeli jets, and no Israeli casualties were reported.

Following Syria’s descent into a brutal civil war in 2011 and 2012, Russia came to the aid of Syrian leader Bashar al-Assad in 2015. Although Russian forces were widely accused of complicity in war crimes, including the bombing of hospitals and other civilian targets in contested areas, the Russian intervention is also credited with securing Assad’s victory over both internal and external threats to his continued rule.

Tensions between Russia and Israel have increased following the Russian invasion of Ukraine on February 24. While Israel has made efforts to remain neutral, many Israelis perceive the conflict as a war of Russian aggression, and Israel voted to condemn the Kremlin for the invasion in a pair of United Nations votes.