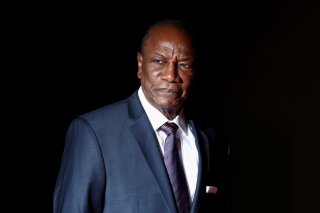 A prosecutor appointed by the military junta of Guinea announced the initiation of legal proceedings against former Guinean president Alpha Conde and twenty-six former Guinean officials for alleged crimes against humanity, including murders and forced disappearances, torture, and sexual abuse of detainees within Guinea’s prison system.

The officials charged in the Guinean government’s report include a former Guinean prime minister, several ex-speakers of parliament, a former leader of the Guinean constitutional court, and successive heads of the country’s security services—all members of the government during Conde’s tenure in office before his overthrow in September 2021.

The appointed prosecutor, Alphonse Charles Wright, indicated to AFP that the “National Front for the Defense of the Constitution,” or FNDC, a Guinean opposition group during Conde’s tenure in office, initiated the legal effort to try Conde and other officials. AFP reported that the legal case against the former leader appears to focus on his actions during 2020 and 2021, the final years of his presidency.

Conde, the first democratically-elected leader in Guinea’s history, was first elected to Guinea’s leadership in 2010 by a wide margin. After his re-election in 2015, Conde spearheaded a constitutional amendment removing Guinea’s term limits, allowing him to run for and win a third term in 2020. This move was highly controversial and resulted in mass protests, and Conde’s primary challenger in the 2020 election argued that the result had been fraudulent. Subsequent anti-government demonstrations led to a government crackdown and a period of prolonged violent unrest, ending after the Guinean leader was overthrown by a military junta led by Colonel Mamady Doumbouya.

Doumbouya, now Guinea’s “interim president,” has sought to consolidate his rule by attacking perceived corruption and human rights abuses under the Conde government. He initially imprisoned Conde but later released him to the United Arab Emirates for medical treatment. Conde returned to Guinea of his own volition in April after his release from the hospital.

The coup in Guinea has strained the country’s relations with its neighbors in the Economic Community of West African States, or ECOWAS, which has increasingly declined to recognize military takeovers in recent years. ECOWAS suspended Guinea after the coup, making it the second country removed following a coup d’etat, after Mali. Roughly six months later, Burkina Faso, a third member of ECOWAS, was also suspended after its own coup. The African Union has suspended all three states, along with Sudan.