Hanging by a Thread: Italian Prime Minister’s Resignation Is Rejected 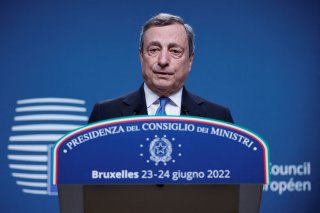 Italian president Sergia Mattarella announced on Thursday that Prime Minister Mario Draghi, who had offered to resign, would not be allowed to do so—a move potentially saving Draghi’s government from collapse and allowing the prime minister further time to gather support in the country’s bicameral parliament.

Draghi had initially announced his intention to resign on Thursday after the Five Star Movement (M5S)—a former member of Draghi’s coalition and the largest party in the Senate, Italy’s upper house of parliament—announced that it had lost confidence in him and would not support him in a no-confidence vote. After the announcement was made, Draghi announced that he had submitted his resignation to Mattarella, claiming that “the national unity coalition that backed this government no longer exists.”

“I have always said that this executive would have continued only if there was a clear prospect of being able to carry out the government programme on which the political forces had voted their confidence,” Draghi added. “These conditions do not exist any more.”

Draghi has governed Italy since February 2021 as the head of a wide-ranging coalition that includes liberal, centrist, and conservative parties, as well as the M5S, which defies conventional political description but has been described as populist and Eurosceptic. The governing coalition includes nearly all parties in both houses of parliament, as Draghi’s administration was established as a unity government eschewing normal politics in order to effectively respond to the country’s devastating COVID-19 pandemic. With the pandemic now largely over, the M5S’s defection from the unity government could be an early sign of resumed partisan divisions within Rome.

Draghi is expected to address lawmakers again on Wednesday, July 20, by which time he will either have formed a plan for the continued functioning of his coalition or will have committed to resigning. It is unclear whether the other parties support him, although Italy’s liberal Democratic Party and Italia Viva party have both confirmed that they will continue to support him. The right-wing populist League party—the largest party in the Chamber of Deputies, Italy’s lower house of parliament—announced that it supported new elections, as did the far-right Brothers of Italy, which refused to join the unity government and has acted as the country’s only major de jure opposition party since 2021.

Draghi, an Italian economist sometimes called “Super Mario” for his major role in preventing the collapse of the euro common currency during the early 2010s as president of the European Central Bank, oversaw Italy’s response to the second year of the COVID-19 pandemic, including the emergence of the Delta and Omicron variants. The prime minister also instituted a number of economic reforms intended to revive funding opportunities from the European Union. However, Draghi’s popularity has sagged following the Russian invasion of Ukraine, which led to increased inflation and further restrictions on Italian gas imports.