Has Turkey Become an American Foe? 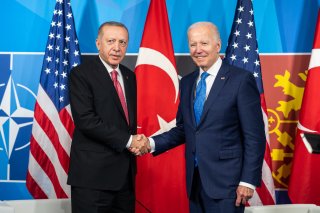 At the virtual Munich Security Conference in February 2021, newly elected U.S. president Joe Biden declared that “America is back. The transatlantic alliance is back.” In a pre-election pitch, Biden also made clear that NATO is at the very heart of U.S. national security and is the bulwark of the liberal democratic ideal.

To date, Biden has held firm on his promise and revitalized NATO in its stand against Russia’s invasion of Ukraine. The same applies to Europe, which has abandoned its lethargy and also taken a firm stand.

Biden also made it clear that the United States would withdraw the vast majority of its troops from the wars in the Middle East and Afghanistan, narrowly defining America’s mission as defeating Al Qaeda and the Islamic State (ISIS). This shift focused on America’s most cost-effective operation, where 2,000 special forces troops and intelligence assets allied with the Kurdish-led Syrian Democratic Forces (SDF) in northern Syria to defeat the Islamic State.

In October 2019, then-President Donald Trump reversed U.S. policy when he, in a telephone call with Turkish president Recep Tayyip Erdogan, greenlighted a third Turkish incursion into Syria and ordered the withdrawal of U.S. special forces from the area. Trump considered the move “strategically brilliant,” although Brett McGurk, once Trump’s special presidential envoy for the Global Coalition to Defeat ISIS, panned it as “strategically backward.” Nevertheless, U.S. special forces have maintained a foothold in the region.

Consequently, U.S. support for the SDF and its backbone, the Kurdish YPG militia, remains a bone of contention between the United States and its supposed Turkish ally. This week, Turkish foreign minister Mevlut Cavusoglu is visiting Washington in an attempt to iron out disagreements with Secretary of State Antony Blinken. These issues include a plan to sell forty F-16 fighter jets and nearly eighty modernization kits to Turkey and Ankara’s purchase of the Russian S-400 air-defense system.

But given that Turkey is a major disruptive force in the region, it is incomprehensible that the Biden administration would consider the sale of the F-16 jets to be in line with U.S. national security interests and NATO’s long-term unity. The State Department’s letter to Congress recommending the sale even went so far as to claim that Turkey is “an important deterrent to malign influence in the region.”

In fact, Turkey has decided to capitalize on its nuisance value. For example, in 2019, it attempted to block NATO’s plans for the defense of Poland and the Baltic states unless it labeled the Kurdish-led Syrian Democratic Forces as terrorists. It is doing the same with Finland and Sweden’s applications for NATO membership, unless Sweden, in particular, hands over a number of political refugees.

As Nate Schenkkan, then the project director at Freedom House, noted five years ago, while hostage-taking is a feature of Turkish foreign policy, it backfired in Ankara’s attempt to swap pastor Andrew Brunson for the Turkish imam Fethullah Gülen.

A cornerstone of U.S. foreign policy in the region is the Eastern Mediterranean Security and Energy Partnership Act, which denotes Greece as a valuable NATO member, Israel as a steadfast ally, and Cyprus as a key strategic partner. In 2021, the U.S.-Greece Mutual Defense Cooperation Agreement (MDCA) was updated to reinforce defense and security cooperation.

In contrast, Turkey has adopted its “Blue Homeland” maritime strategy, which lays claim to 462,000 square kilometers in the Eastern Mediterranean, the Aegean, and the Black Sea, including Greek and Cypriot territorial waters. Erdogan has also threatened Greece with a missile strike.

Against this backdrop, supplying Turkey with additional weaponry makes no strategic sense. According to the Turkish press, the sale of the F-16s is already a done deal. “The [Biden] administration intends the prospect of the sale to prod Türkiye to sign off on Finland and Sweden’s accession to NATO,” according to a report in the Hürriyet Daily News. If this is the case, the Biden administration has settled for a policy of appeasement.

Former National Security Advisor John Bolton holds a different view and believes Turkey’s NATO membership should be called into question because of its support for Russia.

There will be presidential and parliamentary elections in Turkey this June. If there were a level playing field, Erdogan would face defeat, not least because of Turkey’s cash-strapped economy and monumental inflation.

Erdogan has already locked up the co-chair of the Kurdish-based HDP (Peoples’ Democratic Party), Selahattin Demirtas, and Turkey’s Constitutional Court has suspended the HDP’s funding over alleged ties to terrorism. Erdogan’s major contender, Ekrem Imamoglu, the mayor of Istanbul, faces jail time and a political ban on a charge of insulting electoral officials. But three of Erdogan’s rivals also stand a good chance of replacing him.

Now, Erdogan is considering a well-tried way of drumming up popular support: a fourth incursion into Syria against America’s Kurdish allies. For this, he needs Moscow’s approval and for Washington to look the other way.

If all this fails, there are fears that Erdogan might attempt to overthrow the constitutional order with the support of his own militia, SADAT, Turkey’s answer to Blackwater and the Wagner Group.

Robert Ellis is an international advisor at the Research Institute for European and American Studies in Athens.