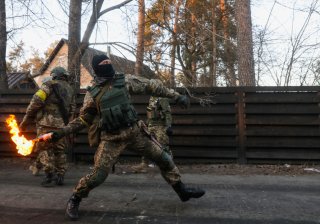 In 1982, the Ukrainian capital of Kyiv celebrated its 1,500th anniversary. Unfortunately, as Kyiv was occupied by multiple invaders over the centuries, the city’s rich history is also filled with tragedy. Kyiv survived assaults by the Khazars, Varangians, Mongols, and Tatars. The city faced occupation by Germany during the First World War, fell under the control of the Red and the Whites over the course of the Russian Civil War, and suffered greatly during World War II.

In 1941, during the First Battle of Kyiv, the German Army successfully conducted the largest encirclement of an enemy force in the history of warfare. The battle was among the worst defeats for the Soviet Red Army, which suffered more than 700,000 casualties, including some 616,000 who were killed, captured, or missing.

Just two and a half years later, the Red Army had its revenge during the Second Battle of Kyiv, part of the broader Soviet offensive known as the Battle of the Dnieper. The Red Army successfully retook the city, but the German defenders seriously bloodied several sizable Soviet formations and kept a vital rail link open. As with many Soviet attacks conducted during the "Great Patriotic War," numbers won the day—a tactic that may not play so well for the modern Russian Army.

The Third Battle of Kyiv?

If the Third Battle of Kyiv occurs, it would be just as devastating for the Russian Army. Even if it can successfully encircle the city, it will face fierce resistance.

Kyiv is now a fortress. Trenches run deep into the woods surrounding the highway leading from the south, and colossal metal anti-tank barriers—Czech hedgehogs—are placed at regular intervals along the road. The blue and yellow national flag of Ukraine flies everywhere.

Russian forces, and certainly Russian president Vladimir Putin, may not have anticipated the resolve among Kyiv’s residents. It isn't just the Ukrainian Army that the invaders are facing.

The people of Kyiv are determined to defend their city, CNN reported. Almost 40,000 volunteers joined the Ukrainian Defense Forces in the first two days after the invasion began. So many people turned up that some were turned away. Now everyone who can is helping in any way they can. They're making Molotov cocktails and camouflage nets for barricades or distributing food and hot drinks. While hunting attire is typical, sweatpants and large coats are now the unofficial uniform.

Reports indicate that Putin likely can’t take the city without destroying it, and he has a track record of doing such things. By the time Russian forces took the Chechen capital of Grozny in 1999, it was described as "the most destroyed city on Earth."

However, Kyiv will be very tough to take and even more challenging to hold. With so many Ukrainians willing to defend their country, they now outnumber the invaders. The old Russian tactic of using overwhelming force may not succeed.