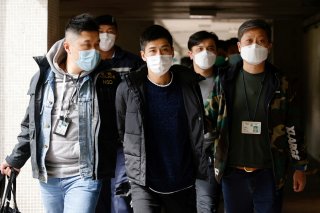 A forty-three-year-old Hong Kong man was arrested after subtly protesting against the Chinese government during a tribute to Queen Elizabeth II of England, who died on September 8, at the British consulate in the “special autonomous region” of China.

Footage of the man circulated widely on social media after he began to play a harmonica outside the consulate. After he played the British national anthem, however, the man played “Glory to Hong Kong,” a pro-independence song widely used during the territory’s mass protests from 2019 to early 2020 and sometimes described as its hypothetical national anthem.

Although the pro-Beijing government of Hong Kong has not formally taken action to ban the song, as it has against other pro-independence symbols and slogans, it has described it as “separatist and subversive,” restricting its public use. Despite the unofficial prohibition, however, others around the man sang along to the music, according to the video of the incident.

A spokesman for the police department later announced that the man, who was not publicly identified, had been charged under Hong Kong’s colonial-era sedition law, according to the BBC. Chinese authorities have increasingly used that law against anti-Beijing dissenters following the end of the protests. Earlier in the month, five Hong Kong speech therapists were charged under the same law for writing a “seditious” children’s book allegedly comparing the Chinese government to a wolf.

Following the queen’s death, thousands of Hongkongers gathered outside the British consulate to pay their respects, leaving flowers and portraits of the queen early in her reign. Britain ruled Hong Kong from 1842, when it was seized from the Qing Dynasty after the First Opium War, until 1997, when it was returned to Beijing under the leadership of Jiang Zemin. The queen was Hong Kong’s monarch at the time of the handover, and commentators in the West have observed that the mourning for her in Hong Kong has often doubled as a tacit criticism of Beijing by implying that the territory was freer and more prosperous during her reign.

At the time of the handover, the Chinese government vowed to govern the territory under the principle of “one country, two systems,” allowing for Hong Kong’s continued political and economic freedom for fifty years. However, the 2019-2020 protests—which largely ended after the onset of the COVID-19 pandemic and Beijing’s approval of a sweeping national security law forbidding most types of dissent—have widely been described as the end of this era. Following the crackdown in mid-2020, the government revised Hong Kong’s election laws, eliminating nearly all directly-elected seats and ensuring that prospective lawmakers were vetted for “patriotism” before entering office.

Earlier in the year, the government also announced its intent to revise the region’s school textbooks, eliminating references to Hong Kong as a British colony and claiming that it was illegally occupied until 1997. The same textbooks reportedly describe the 2019-2020 protest movement as a violent, foreign-backed attempt to overthrow the government, according to local sources.