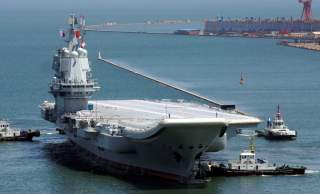 These are heady days for the People’s Liberation Army Navy. It was not so long ago when Western strategists argued whether China was purchasing more ex-Soviet carrier hulls to study the vessels or perhaps just building more floating casino attractions instead. Today, the “near seas” are well stocked with sleek new Chinese frigates and destroyers. And yet, one must keep in mind that Beijing has sufficient land-based firepower (missiles and aircraft) to imply that these ships are merely the icing on the cake for almost any scenario in the western Pacific. Whether the PLA Navy will seriously venture into either the Atlantic or the Arctic is no longer a question of if, but when, and in what form.

Naval analysts have had myriad new Chinese developments to discuss of late, ranging from the first pictures of the Type 002 aircraft carrier, another variant of China’s second generation SSN, to the formidable Type 055 cruiser. One ship that has perhaps not received its due, however, is the forthcoming Type 075 LPH (Landing Platform for Helicopters). A relatively recent edition (2018-24) of Modern Ships [现代舰船] described that vessel’s parameters and prospects in considerable detail under the headline “Future Prospects for the PLA Navy 40,000 ton-class Amphibious Attack Ship [中国海军四万吨两栖级攻击军舰未来展望].” In the article’s introduction, it is explained that Beijing already has four very capable Type 071 LPD (Landing Platform Dock) with perhaps another two or three “in build [在建].” So, where does the Type 075 fit in and “is it necessary [需不需要]”?

The article seems to endorse the spring 2018 revelation from a Hong Kong paper that the ship is now being built in Shanghai at the Hudong Zhonghua [沪东中华] shipyard. Beyond its displacement stated above, this first Chinese LPH is expected to have the following dimensions: a length of 250m, a width of 30m, a draft of 8.5m, and a speed of 23 knots. The ship will carry at least thirty helicopters. A substantially upgraded and enlarged Chinese helicopter force could vastly “increase the surprise aspect of an attack [曾加了攻击的突然性].” We will return to this crucial point momentarily.

Yet, this analysis rather more broadly points out a number of crucial missions that this versatile ship will be able to execute. It is noted, for example, that during the humanitarian aid and disaster relief (HADR) operations following the 2004 Indian Ocean tsunami, that the PLAN was not ready and able to commit forces, but the U.S. Navy made good use of its amphibious attack ships in the HADR role. An anti-terrorism role is also mentioned in the context of expanding Chinese interests in both the Middle East and Africa. Interestingly, the article directly cites the hit Chinese movie “Operation Red Sea” [红海行动] as a point of reference in this respect. Non-combatant “evacuation [撤桥]” operations [NEO] are undoubtedly a major rationale for this platform.

It is duly noted here in this article that “China will certainly not use its large-size amphibious attack capabilities, as the U.S. does, to exert pressure on weak, small countries …” Yet another rather obvious mission for this ship and Chinese amphibious forces more generally will be the capability to potentially “seize and control islands and reefs [夺控岛礁], … mainly involving the East Sea Diaoyu Islands and the reefs of the South China Sea.” There is indeed a recognition in this article that (similar to the fashion in the U.S. Army and Marines), Chinese amphibious forces can “play a vital role in (occupying) sea control nodes,” for example by deploying land-based, mobile anti-ship cruise missiles.

However, there is no getting around priority number one for the amphibious force and this platform in particular: “… realizing unification of the homeland [实现祖国统一].” That discussion begins from the following premise: “With the full use of long range precision weaponry, the PLA could achieve air and sea supremacy in the areas around Taiwan…” That would “pressure and even paralyze the targeted troops on the island.” Moreover, “large-sized and very formidable [PLA] amphibious forces is still needed to breach the transport nodes of the [defending] ground forces.” Years ago, PLA amphibious forces were rather antiquated, according to this Chinese analysis, and there existed the problem of “high losses [损率高]” in an amphibious campaign. The problem has been partially rectified and it is maintained that the PLA’s modern amphibious attack will rely on “highly effective command-and-control, rapid movement, and massive, high-precision air support.”

While the article has some hints regarding Beijing’s efforts to field both “jump jets” (VSTOL), as well as an Osprey-like tilt-rotor variant, the analysis makes clear that China does not depend on such technological marvels. It states candidly that a “relatively large gap [较大差距]” will continue to separate China’s amphibious capabilities from those of the U.S. Navy and Marine Corps. Nevertheless, the article takes clear umbrage with a 2017 Japanese assessment that China lacks sufficient strength to get across the Taiwan Strait. It makes clear that the mission of the Type 075 in such a campaign would be to execute “transport and fire support … [to enable] surprise attack.” It is noted that in December 2017, “the PLA Navy Marines revealed its first aerial surprise attack training base [海军陆战队空中突击营首次公开亮相].” Not surprisingly, the last line of the article states emphatically that the PLA has the requisite forces to “confirm unification by force.”

Other signals emerging from the Chinese defense establishment seem to corroborate this assessment. A full spate of new transport and attack helicopters are coming online (as well as other variants). Chinese special forces have been a priority for quite a while now and the results are impressive. Ballistic missiles are often mentioned as the most difficult problem, but too little Western analysis has assessed the compounding threats of both land-attack cruise missiles and especially rocket artillery (and that is before the PLA Air Force gets into the mix).

China is rapidly equipping its Marine forces with the new Type 05 amphibious armored vehicle. According to the November 2018 edition of Naval and Merchant Ships [舰船知识], there is actually a family of such amphibious vehicles, which include not only the well-armed attack variant, but also communications and crucially an “obstacle clearing vehicle [破章车]” that deals with mines and the like. If that wasn’t enough, a “new type assault boat [新型冲锋舟]” was unveiled at the 2018 Zhuhai air show, and profiled in a recent edition (2018-23) of Ordnance Science and Technology [兵工科技].

Western analysts, who assume that allied submarines will put China’s amphibious task force on the bottom should note that the Taiwan Strait is exceedingly shallow. That means it is not favorable to submarines, especially the larger nuclear submarines that comprise the U.S. undersea fleet. To make matters worse, the same bathymetry means these waters are easy to mine—a cheap and reasonably successful counter to submarine operations. If only sinking a few Chinese large, amphibious attack ships would decide the campaign, that would be expedient, of course. However, Chinese doctrine in the case of a large-scale amphibious assault will flood the Strait with hundreds if not thousands of ships (and boats), making the targeting problem impossible. Indeed, a researcher at the Chinese Academy of Military Sciences recently published a piece in PLA Daily [解放军报] under the interesting headline “Wooden Boats Versus Warships [木船vs军舰],” observing that the PLA employed 2,249 boats including mainly civilian craft in its successful conquest of Hainan Island during early 1950.

Unfortunately, the U.S. foreign policy “blob” seems to be in a state of torpor regarding the military balance across the Strait, dismissing the facts stated above with the wave of a hand as “so much propaganda.” As they continue the quixotic search for the American wonder weapon that will “save Taiwan,” American legislators meanwhile seem to delight in “poking the panda” between the eyes. While plenty of scholars, in contrast, contend that a negotiated solution exists for this most vexing diplomatic problem—e.g., confederation—these options remain almost entirely unexplored, even though Taiwan and Mainland leaders met face-to-face for a historic breakthrough summit as recently as November 2015. Ignoring both history and geography, we stand on the edge of an ever steeper precipice, seemingly daring Beijing to “break the kettles and burn the boats [破釜沉舟]” with a sudden all-out attack.