Israel and Joe Biden Can Work Together on Iran 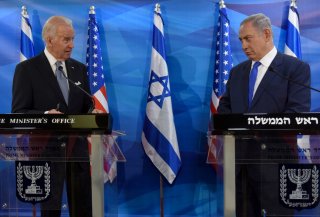 The Biden administration’s expected policy toward the Iranian nuclear question will likely be comprised of two phases. Part one will be an interim de-escalatory stage in which Tehran’s rolls back its violations of the 2015 nuclear deal in exchange for a respite from the economic stranglehold that Trump’s “maximum pressure” sanctions policy imposed. Part two will be an effort to build upon the 2015 nuclear deal in a way that expands the restraints on Iran’s dangerous behavior. While the actual contours of each stage remain highly uncertain, how Israel approaches the Iran nuclear issue could have significant implications not only for U.S. policy on Iran but for the U.S.-Israel relationship more broadly.

Ideally, Jerusalem would like to see the Biden administration reach a new and improved nuclear deal in a single step by exploiting the leverage from Trump’s “maximum pressure” campaign to close the previous agreement’s loopholes. However, that appears unlikely given the long process it would entail as well as the urgency that the Biden administration places on de-escalating the situation vis-à-vis Iran and halting the regime’s slow creep toward the nuclear threshold.

One of Israel’s key concerns with the Biden administration’s two-step approach is that the “interim” phase will become permanent, rather than a foundation upon which to build a more comprehensive agreement. This concern is based on the assessment that if the incoming administration follows through on its promise to return to the JCPOA once Iran returns to compliance, then the United States may find itself with limited incentives to induce Iran into making further concessions. In addition, Washington may discover that Iran is not interested in a more expansive deal than the one signed in 2015 and that Teheran does not intend to barter away the loopholes which it painstakingly negotiated in the previous agreement.

At the same time, Israel must be careful to avoid fighting tooth and nail against a policy that the White House is determined to implement. It may not only lose the battle, but it could also lose the war by inflicting significant damage on its relations with the White House and the Democratic Party more broadly. We may ultimately see an inverse causal relationship between how public the disagreements between Jerusalem and Washington on the Iran nuclear issue become and the degree to which Israel’s interests are taken into account by the White House.

Rather than embarking on the thankless and perhaps even dangerous task of thwarting the Biden administration’s Iran policy, Israel should seek to shape it in a way which better protects its core interests. To be clear, there is nothing unusual or untoward about Israel seeking to have its interests factored into the U.S. policymaking process; in East Asia, U.S. allies are a key factor in the formulation of Washington’s approach toward North Korea.

Through discrete dialogue with U.S. counterparts, Jerusalem should ensure that any interim de-escalation agreement is followed by a more comprehensive deal. To that end, it must encourage Washington to withhold concessions that Iran views as vital during phase one so as to incentivize Tehran to commit to the second phase of negotiations. In addition, the Government of Israel should press the United States to maintain maximal economic leverage for phase two in order to create the conditions that allow for a comprehensive agreement that restricts Iran’s nuclear program to the greatest extent possible; it may be necessary to remind the White House that Tehran is desperate and already banking on sanctions relief. As for the terms of a JCPOA 2.0, Israel should push for an extension of the nuclear restrictions’ “sunsets” by thirty years, a more intrusive “anytime anywhere” inspections regime, and greater restrictions on Iran’s nuclear R&D.

At the same time, Israel and the United States should coordinate an approach that advances their core interests vis-à-vis Iran in the event that Tehran seeks to remain in the interim stage rather than sign a comprehensive agreement that maximizes the distance between the regime and a nuclear weapon. After preparing such a plan with the United States in advance, Israel may be more inclined to avoid confrontation with Washington at the outset—even if it skeptical of the White House’s approach. Some policy options for coping with such an eventuality include the reimposition of “maximum pressure” on Iran’s economy, coordinated covert operations to sabotage the nuclear program and halt its progress toward the threshold, and, as a last resort, coordinating nuclear red-lines for Iran and the division of labor in the event a military option becomes necessary to stop Iran from getting the bomb.

In light of the Abraham Accords, Israel should also seek to leverage its newfound partners in the region by developing a coordinated approach to U.S. policy on Iran based on a shared interest of reining in the Iranian threat. While it is true that there are some differences regarding the relative weight that Israel and the Gulf states assign to Iran’s nuclear and regional activities, with Israel prioritizing the former while the others prioritize the latter, this should not prevent the formation of a unified front. These issues should be dealt with on two separate and independent tracks: the nuclear issue can be dealt with via a negotiated agreement, while Iran’s subversive (and plausibly deniable) activities throughout the Middle East cannot realistically be regulated by any document and must be countered on the ground by a U.S.-led coalition of regional allies both before and after a new nuclear deal has been reached.

Ultimately, it is in President-elect Joe Biden’s interest to bring America’s Middle Eastern allies on board with its Iran policy. Failing to take the interests of regional partners into account could poison longstanding security relationships and may result in states taking independent steps to protect their vital interests or even efforts to sink Washington’s policy initiatives. However, if they seek to leverage that in order to confront the White House and dictate Washington’s policy, Middle Eastern leaders may not only fail to yield the desired result vis-à-vis the Iran nuclear program but inflict considerable damage beyond the nuclear realm. A word of advice to all: choose your battles wisely.

Eldad Shavit is a senior researcher at Israel’s Institute for National Security Studies and previously served in senior roles in Israeli Defense Intelligence and the Mossad. Twitter: @INSSIsrael

Ari Heistein is a Research Fellow and Chief of Staff to the Director at Israel’s Institute for National Security Studies. Twitter: @ariheist