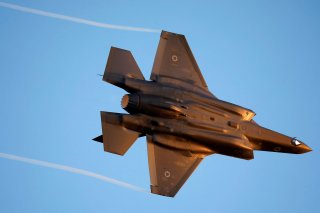 Israel’s Defense Minister Benny Gantz visited the Israel Defense Forces Northern Command in mid-November. Israel had discovered a number of improvised explosive devices on the Golan Heights, along the border with Syria. This is an area that has been tense in the last years after the Syrian regime retook southern Syria from rebel groups and Israel began to express increasing concern about the presence of Iranian threats.

The Israeli concerns dovetail with similar concerns more than one thousand miles away in Abu Dhabi, where a close strategic alliance with the United States is important to the United Arab Emirates. The UAE and Israel are both concerned about Iran’s threats in the region. Together the UAE and Israel are also now linked by a new peace accord, called the Abraham Accords, which came into being between August and September. This emerging change in the region, with flights between Tel Aviv and Dubai now normal, also presents the United States with a new partner for its F-35 stealth jet program and also creates a new path for U.S. diplomats visiting the region.

It’s worthwhile to think of this as a multi-layered strategic cake. Secretary of State Mike Pompeo’s trip to the Middle East in November 2020, likely his last major trip in his role with the Trump administration, showcases this alliance system. His trip included a stop in France and then Turkey, where he got the cold shoulder. The Trump administration has become more critical of Turkey’s aggressive behavior against NATO allies in the eastern Mediterranean, as well as Turkey’s hosting of Hamas, which the United States views as a terrorist organization. As Washington has sought to push a new deal for F-35 jets with the UAE it has also been clear that Ankara won’t receive the fifth-generation warplane as long as Turkey is using Russia’s S-400 air defense system, which Turkey has begun testing.

Pompeo’s trip to the Middle East builds on the Abraham Accords, with stops in Israel and the UAE. In August Pompeo traveled to Sudan, Bahrain, the UAE, Oman and Israel. Days later the State Department slammed Turkey for hosting Hamas. At the same time, the United States and the UAE were in discussions about a $23 billion deal for the UAE which would include the Emirates buying the F-35 jets, MQ-9 Reaper drones, as well as other munitions.

The F-35 deal comes as the US has carried out three F-35 jet joint drills with Israel this year, dubbed the “Enduring Lightning” exercises. What this means is that in August as the F-35 deal with the UAE was being revealed, the US and Israel were drilling at an unprecedented level with the new aircraft. Adding F-35 jets to the arsenal of the UAE, improving its air force which already has advanced F-16 jets, would make the US, UAE and Israel a triangle of F-35 power in the region, with the United States already flying its F-35 jets out of Al-Dhafra base in the Emirates.

The F-35 jet is a unique plane with special capabilities. Israel has contributed to this program, building wings and helmets for the program, and receiving its unique version of the aircraft. Israel was an earlier operational user and is slated to get fifty aircraft. It already has two squadrons. Initial reports that the UAE would get the plane as well were met with skepticism in Israel, amid concerns it might erode Israel’s Qualitative Military Edge. Israeli voices in the government and the opposition wondered whether Israeli Prime Minister Benjamin Netanyahu had made the deal for the F-35 jets to get peace with the UAE. He insisted he had not.

A recent interview with the UAE Ambassador to the US Yousef Al-Otaiba at Israel’s Institute for National Security Studies about the F-35 jets and a discussion at The Economic Club in Washington provide more insight into the F-35 deal. Israeli Ambassador to the U.S. Ron Dermer said that “the F-35 issue was not part of the deal made with the Emirates. We take the American commitment to maintaining Israel’s qualitative military edge very seriously.” Gantz went to Washington and met his U.S. counterpart three times in October and the F-35 issue was one aspect of those meetings. The danger of Iran had helped bring Israel and the UAE together, Dermer said on Nov. 16. Israel now says that the F-35 sale to the UAE, which includes dozens of aircraft, will not harm the U.S. commitment to Israel’s qualitative military edge.

There has become speculation that a new U.S. administration under president-elect Joe Biden might review the F-35 deal or even seek to block it. Antony Blinken, an advisor to Biden said in early November that the F-35 jets had been available to Israel and “only Israel in the region.” The UAE has now put together an impressive white paper on the F-35 deal titled “the UAE and the F-35: Frontline Defense for the UAE, US and Partners.” The paper includes support for the deal from former U.S. commander and former Director of the Central Intelligence Agency Gen. David Petraeus who argues that the F-35s will help the UAE maintain its capability relative to that of Iran. Given that, and given Israel’s support for Emirati acquisition of the F-35 jets, U.S. approval of that purchase is both “advisable and timely.”

The UAE report on the acquisition asserts that the U.S. sale of the F-35 jets also is in line with U.S. National Defense Strategy that “calls for enabling partners to take on more responsibility for their own and collective security in the Middle East.” This is important because the United States is transitioning from the Global War on Terror to a strategy that foresees building up the U.S. Navy and confronting near-peer adversaries like China and Russia. This means Israel, the UAE and other partners must work more closely together. The F-35 jet, because of its unique technology, sensors, communications and capabilities, works best with other F-35 jets. This is why the United States and Israel have been flying the plane together, without F-16 jets and other planes around, to illustrate the capability of the fifth-generation fighter and what it brings to the table in terms of intelligence gathering, precision and targeting abilities. Israel’s growing support and the UAE paper on the subject, as well as Pompeo’s trip, illustrate the growing support for the deal. Israel’s concerns about threats, as revealed by the explosive devices found on the Golan on Nov. 17, show that the tensions in the region are growing.