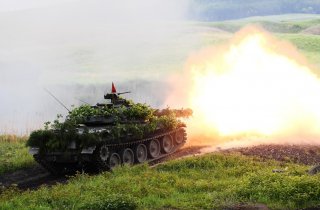 Last week Japan's defense ministry unveiled a military budget that took many by surprise. The island nation's military budget has been steadily rising for nearly a decade, but the record-setting budget request, which was for $52 billion, comes as part of a push to maintain military readiness as Tokyo faces pressure from China and North Korea.

Japan's government hasn't been silent about noting that it has felt threatened by China's vast military resources, which come amidst territorial disputes, as well as an ever-unpredictable North Korea. As a result, the Ministry of Defense asked for 5.49 trillion yen—$52 billion—for fiscal year beginning April 2021, which would mark nine straight years of increases and a roughly eight percent rise from the 5.3 trillion yen requested for the current year.

This is the first military budget under Prime Minister Yoshihide Suga, who came to power this month with the pledge to continue the policies of his predecessor Shinzo Abe. Under Abe, the Japanese military was expanded, which was highly circumscribed due to the country's pacifist power-World War II constitution.

With an eventual plan to be equipped with 105 F-35As and 42 F-35Bs, Japan would become the largest operator of the fifth-generation stealth fighter aircraft outside of the United States. The F-35B aircraft would reportedly be operated onboard the Japan Maritime Self-Defense Force (JMSDF) helicopter destroyer Izumo, which been undergoing a retrofit so that it can deploy the Lockheed Martin fighters.

In December 2018, the Japanese Cabinet approved a plan to convert the ships into a class of aircraft carriers that could operate with several SH-60K/J helicopters or F-35Bs. Along with the sister ship Kaga, these are currently the largest surface combatants of the JMSDF.

The plan had been to build the system in two locations on the main island of Honshu to protect against possible North Korean attacks, but now the Ministry of Defense is considering an option for an interception system at sea. That could entail using ships or mega-floats, or by building structures similar to offshore oil rigs. Officials in Tokyo have determined that a price can't be attached to the system until the government actually determines how it will proceed.

An additional $218.6 million of the budget has been earmarked to go towards the research and development of Japan's hypersonic weapons program, while an additional $144.9 will go to the development of a standoff long-range electronic warfare aircraft based on the C-2 airlifter. A further $67.2 million has been requested for the acquisition of onboard systems for that platform.

Japan's Ministry of Defense is also addressing the need for less traditional defense, including research and operation of space and cyber units and a new electromagnetic warfare unit—the later being based at the Japan Ground Self-Defense Force's Asaka base, north of Tokyo.

The Self-Defense Force plans to launch a new cyber unit with 540 personnel, while the Space Operations Squadron, which was launched in May as part of the Japan Air Self-Defense Force, could have at least seventy new personnel who would add to the twenty initial members. The goal is to grow the unit to at least 100 members when it is fully operational in 2023.

None of this is actually a “done deal.” The budget request will now be reviewed by Japan's Finance Ministry, which will decide on funding allocation and announce the final budget later this year.