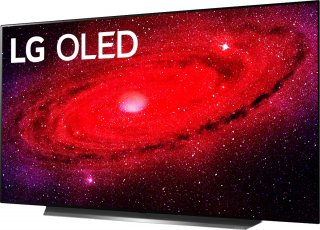 If you had to pick one MVP out of LG’s much-vaunted OLED HDTV lineup, few would argue with the selection of the 65-inch CX Series.

This particular model—which can be had for roughly $2,300 at both Best Buy and Amazon—is jam-packed with all of the power and next-generation perks that you need to create the best picture and viewing experience on the planet.

Here’s a quick rundown of what you’ll get with the CX Series: sleek and slim design, fantastic picture quality, accurate colors, deepest blacks, and inimitable uniformity and contrast ratios. And like the little brothers B9 and C9 Series, the CX also proves that its wide-angle viewing is second to none.

Reviewed.com had a similar take, raving about the set’s “amazing picture quality,” “premium design,” and the fact that the TV is “future-ready.”

“It’s a bit expensive, and may not be bright enough for some rooms, but otherwise the CX Series is an awesome choice if you want one of the best TVs of the year,” the site wrote.

CNET has also jumped on the bandwagon, saying that the CX is “the picture against which all other TVs are measured.”

The set also comes with Cinema HDR, which supports a wide range of formats for scene-by-scene picture adjustment—including the must-haves of Dolby Vision, HDR10, and HLG.

The one aspect that has the potential to disappoint some LG TV owners is the webOS operating system, as it lacks the innovative extras and app-based setup and coverage of Roku TV, Samsung’s Tizen, or Sony’s Android TV. If you desire a bigger selection of apps, your best bet is to go out and get an external streamer.

Because of the CX’s reliance on organic light-emitting diode technology, there is no backlighting to be found, so the overall minimalist-driven design is vanishingly thin. There is, though, a noticeable slight bulge at the bottom of the panel, but this houses the necessary inputs, power supply, speakers, and other ancillary components.

For all the hardcore gamers out there waiting patiently for the arrival of the next-generation consoles from PlayStation and Xbox, know that the CX supports the Nvidia G-Sync standard and AMD FreeSync, which help to eliminate screen tearing and stuttering. The end result is noticeably smoother gameplay—no matter how graphics-intensive the games are.