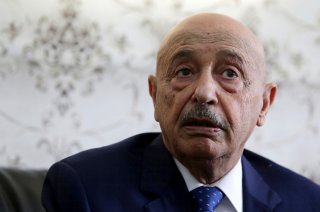 In a video statement announcing his candidacy, Saleh claimed that as the country’s president, he intended to “turn the page on conflict” and “look towards the future.” To do this, the speaker announced his intention to launch a national reconciliation process for the country.

Libya has been in various stages of conflict since 2011 when protests against the elder Gaddafi led to a brief civil war. NATO forces decisively intervened against Gaddafi in that conflict, leading to the dictator’s capture and execution by rebel forces.

Gaddafi’s death, however, led to Libya’s division, with the UN-recognized government controlling Tripoli and the western half of the country and a rival government headquartered in the city of Tobruk controlling the east. Each side has enjoyed separate foreign political and military support, with Turkey and Qatar supporting the west and Egypt and the United Arab Emirates (UAE) supporting the east.

The Libyan election, slated to take place on December 24, is intended as a starting point for uniting the governments. However, even in advance of the elections, procedural conflicts have erupted, with representatives from the western half objecting to the election law. That law, which was passed in September by Saleh, has been criticized on the basis that a quorum was not present for its approval. The law is controversial because it could allow Saleh and Haftar to continue in their positions in the east even if they lost.

Libya’s last election was held in 2014; in that election, Saleh was picked to lead the House of Representatives in Tripoli. After a Libyan court decreed that the House of Representatives was not legitimate, its members fled east to Tobruk, forming the basis of the country’s eastern government. Saleh was sanctioned by the United States after he refused to recognize the UN-backed Government of National Accord (GNA) in the west; those sanctions were removed in the run-up to the election.

In his remarks, Saleh urged an end to violence, claiming that the votes of Libyans would be “the only source of legitimacy for any authority.”