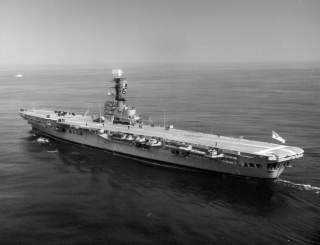 The ability to project airpower across oceanic expanses has long appealed to island nations—indeed, the first carriers were deployed by the United Kingdom and Japan. After experiencing Japanese air and submarine attacks during World War II, Australia understandably sought a carrier of its own.

This came in the form of the Sydney, originally one of sixteen “Light Fleet Carriers” laid down in the United Kingdom, intended to fall in between the huge slugging-power of a fleet carrier and small escort carriers used to protect convoys from submarines. Construction was paused at the end of World War II, but Australia scooped up the Terrible in 1948 and renamed her HMAS Sydney. The 190-meter long carrier could carry up to thirty-eight Sea Fury and Fairey Firefly propeller planes. These saw action in the Korean War starting in 1951, flying over 2,300 sorties and losing thirteen aircraft in combat.

However, the Australian Navy wanted a carrier that could launch and recover jet fighters—and that was possible with Sydney’s sistership Majestic. Renamed Melbourne, she was completed with a then-innovative 214-meter-long angled flight deck which allowed one fighter to land on the longer “slant” while another took off from the “straight” ramp. She also came with steam-catapults and a now-standard mirror landing aid.

In 1956, the Melbourne sailed from Glasgow to Australia, her deck crammed with sixty-four aircraft to serve in her flight group. The 17,630-ton vessel was powered by two reduction-gear turbines and four three-drum boilers, allowing a maximum speed of twenty-four knots.

A symbol of Australian naval power, Melbourne showed the flag across the Pacific and even starred in the post-apocalyptic film The Beach. However, she remained one of the smallest carriers active post-World War II, hampered by limited deck-length and water for her steam catapults. She primarily assumed anti-submarine duties, her air group shrinking to just ten planes and ten helicopters.

On February 10, 1964, Melbourne and the destroyer HMAS Voyager began performing post-refit sea trials. That evening, Voyager was to assume “plane guard” position, ready to scoop up any aviators from the sea should they crash during takeoff. Indeed, Melbourne would lose thirty aircraft over the years of her operation, mostly in takeoff and landing accidents.

After a turn, at 8:52 PM it was time for the Voyager to reassume plane guard station. However, after initially turning away from the Melbourne, Voyager swerved starboard back towards the carrier. The Melbourne’s crew assumed Voyager was merely “fish-tailing” to bleed off momentum. Only three minutes later did both captains realize they were locked on a collision course; the Melbourne frantically tried to reverse its momentum while the Voyager turned hard to starboard.

It was too late. Though the length of six football fields separated the vessels, their momentum was too great to avert disaster in the next sixty seconds.

The Melbourne’s bow smashed into the Voyager’s bridge, killing the command crew and splitting the ship in two and tearing a huge chunk out of the carrier’s bow. The destroyer’s forward boiler exploded, even briefly set fire to the Melbourne’s deck. Immediately, the Melbourne’s boats and helicopters began rescuing survivors. All told, eighty-two of the three-hundred-and-fourteen onboard the Voyager were killed.

Initially, a Royal Commission held the Voyager’s crew responsible for the accident, but still apportioned enough blame to the Melbourne’s Captain John Robertson to sink his career. This caused such controversy that a second Royal Commission investigated the Voyager’s deceased Captain Duncan Stevens due to allegations of alcoholism. Although his drinking appears immaterial to the accident, the second commission exonerated Stevens. Legal proceedings regarding compensation for survivors and crew family members continued through 2017.

During this period, Melbourne escorted her sistership Sydney as she ferried Australian troops back and forth to Vietnam, though her air group never saw combat. But the carrier’s bad luck was not yet spent.

In 1969 the Melbourne joined three U.S. destroyers and two New Zealand frigates for an exercise in Subic Bay off the Philippines. Captain John Phillip Stevenson of the Melbourne and his superior both explicitly warned the escorts about the earlier accident, and stipulated they peel away from the carrier when executing turns and approach no closer than three kilometers on plane guard.

After several successful drills, at 3 AM on June 3 the U.S. Navy destroyer Frank E. Evans turned starboard into the carrier’s path. Stevenson notified Frank’s crew of it dangerous trajectory, but naval regulations stipulated the smaller ship should alter course while the larger holds steady. However, Frank’s captain was asleep and only inexperienced lieutenants were at the helm. At the last minute, Frank abruptly veered starboard just as Melbourne gave up and turned hard to port.

Tragically, the simultaneous maneuvers ensured a collision that otherwise may have been narrowly avoided (see this diagram). History horrifically repeated itself as the Melbourne plowed into Franklin and split her asunder. The Frank’s bow-section quickly sank, taking with it seventy-four of the two-hundred-and-seventy-three crew, including three brothers. In the next half hour, the Melbourne’s boats and helicopters rescued the survivors. Yet again, Melbourne escaped with a large gash on her bow.

A joint U.S.-Australian inquiry held both ships’ captains responsibly, but the convening U.S. Admiral exhibited flagrant bias. An Australian court-martial exonerated Stevenson, but again the captain’s career was sabotaged. Stevenson resigned and finally received a letter of pardon in 2012.

The now reputedly cursed ship served on into the 1970s, but grew increasingly expensive to sustain because her manufacturers had long ago gone out of business. As the World War II-era carrier sailed into retirement in 1982, Canberra sought a replacement—and received a particularly sweet offer: the United Kingdom’s carrier Invincible, for a mere 285 million Australian dollars.

But fate again intervened in unlikely fashion: two months after Australia declared her intent to purchase, Argentine troops invaded the Falkland Islands. The Royal Navy suddenly desperately needed all her carriers—and decided to hold on to them after the war ended in June.

Melbourne remained at dock for three years, as schemes were floated to turn her into a helicopter carrier or a floating casino. Ultimately, a Chinese shipbuilder purchased Melbourne for scrapping for 1.4 million Australian dollars.

But the Melbourne had one last bit of mischief remaining. While being towed to China, she snapped her tow-lines and ran aground, eventually requiring a second tug.

Upon arrival at Guangzhou, China the PLA Navy snapped up the carrier and closely studied her for the next seventeen years. Though the electronics and steering had been removed or sabotaged, the Melbourne’s steam catapults and mirror landing system were fully intact, and her deck is rumored to have been used to practice landings. China would later acquire Russian carriers, Beijing is currently building a CATOBAR-equipped Type 003 carrier undoubtedly benefiting from the PLAN’s study of the Melbourne.

Australia never got a new carrier and retired her fixed-wing naval aircraft in 1984. However, if the Royal Australian Navy so desired, it could try acquiring F-35B jump jets to fly off its new Canberra-class amphibious assault ships.

This Is China's Plan to Overtake America as the Next Superpower