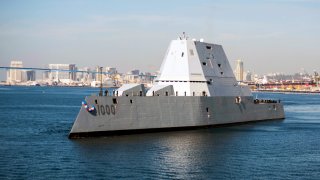 The U.S. Navy’s troubled Zumwalt-class of guided missile destroyers could each end up with twelve hypersonic missiles in the coming years.

The Navy originally intended the stealthy Zumwalt class to support troops on shore with a pair of naval guns—essentially advanced, long-range 155mm artillery pieces. However, that plan never came to fruition, as the ammunition for the naval guns was prohibitively expensive.

The hypersonic missile in development for the Zumwalts will be fielded in two variants: one for the Navy and one for the Army, a development and acquisition strategy that will reduce program costs for both branches.

Integrating hypersonic weapons into the Zumwalts will also give them a clear mission—a significant development for a platform whose purpose has been unclear.

“On these high-end systems, it is no longer affordable for a single service to do that. We’re working with the [Office of the Secretary of Defense], we’re working with the Army and with what our resource sponsor is doing to figure out how we build this capability once and get out to multiple platforms,” Wolfe explained.

“It’s strategic, but it’s not nuclear. If you look at the numbers, particularly with what we’re going to with the ranges, it is very much a strategic asset. You can hold very high-value targets at risk … and you can do that with all these various platforms,” Vice Admiral Wolfe explained to USNI News.

Though not yet in service, hypersonic-armed Zumwalts—combined with their stealthy hull design—could prove to be useful.