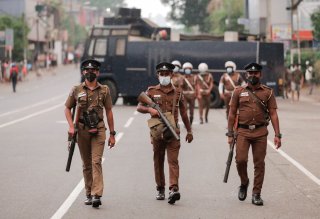 Following the overthrow and exile of former Sri Lankan president Gotabaya Rajapaksa, demonstrators returned to the streets after the country’s parliament elected Ranil Wickremesinghe, the former prime minister and a subject of protests himself, as the country’s interim president.

The country’s demonstrators returned to the “GotaGoGama” site in Colombo, a focal point for protests during the preceding months, and protest leaders vowed that they would remain in the streets until the parliament changed its decision and replaced Wickremesinghe with a more acceptable candidate.

“As you know, the parliament elected a new president today, but that president is not new to us, it is not the people’s mandate,” Wasanthi Mudalige, the leader of the Inter University Student Federation and a key protest leader, said after Wickremesinghe’s election. “We managed to kick out Gotabaya Rajapaksa … but [Wickremesinghe] has now secured that seat from the back seat.” “Ranil isn’t our president,” he added. “The people’s mandate is on the streets.”

A longtime member of parliament and former leader of the opposition, Wickremesinghe was chosen as prime minister in May after protests forced Mahinda Rajapaksa, his predecessor in that office and the former president’s younger brother, to resign. Although the Sri Lankan economy improved slightly during Wickremesinghe’s tenure, protesters argued that he had collaborated with the elder Rajapaksa and had contributed to the country’s economic crisis, vowing that he remained an unacceptable alternative to their leadership.

The elder Rajapaksa’s decision to resign came after thousands of protesters stormed his official residence two weeks ago, prompting the president to flee to the Maldives and then Singapore. Wickremesinghe’s residence and office were also overrun by protesters, prompting the prime minister to vow to resign after parliament chose an alternative choice for prime minister.

Although 134 of Sri Lanka’s 225 lawmakers supported Wickremesinghe, many of the remaining lawmakers vocally opposed his appointment, citing his unacceptability among protest leaders and his close involvement with Rajapaksa.

The protests against Rajapaksa and Wickremesinghe have continued without interruption since April, following months of frustration regarding Sri Lanka’s financial insolvency, debt buildup, and inability to import essential items including food and fuel. Rajapaksa’s decisions after his election to the presidency in 2019, including his decision to slash taxes and ban chemical fertilizers, are widely perceived to have contributed to Sri Lanka’s budget deficit and the destruction of its agricultural sector.

Wickremesinghe’s appointment as interim president is slated to last until 2024, when a new presidential election will be held. After he is sworn in, his former offices as a member of parliament and as prime minister will be vacated, and his cabinet will be dissolved, prompting the formation of a new government among members of parliament.