Not Just F-35s: Poland Has Big Plans to Prepare for a War with Russia 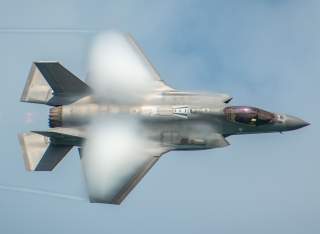 Russia and Germany dominated Poland throughout the majority of the twentieth-century and nearly all of the nineteenth century. Since Putin’s seizure of the Crimean Peninsula in 2014 and involvement in the separatist conflict in Eastern Ukraine, Warsaw has increased military spending substantially to 2.1 percent of Gross Domestic Product in 2019.

Warsaw’s current Technical Modernization Plan projects a €43.2 billion in spending from 2017-2026, by the end of which 39 percent of which will be directed at procuring new systems.

However, Dr. Krzysztof Kuska, a defense analyst and contributor to Janes and other publications, wrote to me that those numbers don’t tell the whole story.

“Polish armed forces, although looking good on paper, were left behind for many years. It will be difficult to bring them back into shape with limited resources that Poland has. Although spending 2 percent of the GDP, you have to take into account the size of the GDP compared to other Western countries.”

Poland’s northeastern border includes the forty-mile wide Suwalki Gap—NATO’s only land-corridor connecting the militarily vulnerable Baltic states. But Poland itself is exposed to attack by Russian tactical ballistic missiles and long-range artillery in the Russian exclave of Kaliningrad, and potentially from Russian forces staged in Belarus.

Even the airspace directly above many Polish airfields could theoretically be interdicted by Russia’s S-400 long-range surface-to-air missiles.

Poland’s F-35s will genuinely transform the Polish Air Force’s ability to cope with Russia’ anti-access systems, as detailed in a companion article. But they can only help if they’re not destroyed on the ground by cruise and ballistic missile attacks.

This explains why Poland is spending $4.7 billion—its largest arms deal ever until the F-35 deal is finalized—purchasing two batteries of Patriot PAC-3 missile batteries comprising four radars, sixteen launchers and 218 missiles. Called the Wisla in Polish service, the PAC-3+ is optimized for knocking down incoming ballistic missiles within twenty-two miles and up to 80,000 feet high.

However, “The Patriot will be just one of the layers of a modern air defense system. The rest of the layers are not set in stone yet,” points out Kuska.

The shorter-range layer called Narew has yet to be determined. Raytheon’s heat-seeking SkyCeptor hit-to-kill missile is being considered along with European MBDA’s radar-guided Common Anti-air Modular Missile (CAMM) which “soft-launches” (without igniting its motor) from a Jelcz eight-wheel-drive vehicle.

Narew and Wisla batteries—and eventually a long-range Wisla Phase II—will be networked together, along with additional radars via an Integrated Air and Missile Defense Battle Command System.

Poland’s air defense buy coincides with Romania’s $3.9 billion acquisitions of its own PAC-3 batteries, and the deployment of Aegis Ashore radars and SM-3 anti-ballistic missiles in both Poland and Romania, giving NATO an air defense “shield wall” of sorts running between the Black to Baltic seas.

Poland’s land forces need to be able to strike back at Russian batteries, not just fend off their missiles. This has driven Warsaw’s $414 million acquisition of twenty M142 HIMARS multiple-rocket launcher systems—a price that has proven easy for Warsaw. These can salvo six 227-millimeter rockets that can strike targets dozens of miles away, saturating broad areas with cluster bomblets or launching more precise strikes with GPS-guided rockets. They may eventually receive even longer-range missiles.

According to Kuska, “these will change the state of the game on the ground when provided with superb ammunition. The same goes for Rak (“Crayfish”) 120-millimeter self-propelled mortars,” an auto-loading weapon that can shoot eight rounds per minute, mounted in a turreted eight-wheel armored vehicle.

Poland is moving more slowly to procure helicopters, following the cancelation of in 2016 of a deal to procure fifty from Airbus.

“The old Soviet-era Mi-24s are practically useless on today’s battlefield. At this point, we don’t know when, how many, and what type of helicopters will be bought.”

Of course, combat systems are useless without solid supporting assets in logistics, intelligence and cyberwarfare.

The future of Polish surveillance capabilities is hazier.

While NATO allies can fill the gap here, Kuska argues “such crucial piece of homeland defense should be covered in-house. There are currently plans to buy some Medium-Altitude, Long-Endurance drones and smaller UAVs but no definite orders on this front.”

The Polish Army has also devoted around $770 million to the CYBER.PL.MIL cyberwarfare program—sensible given Russia’s high-profile use of information warfare for political destabilization, and even as a battlefield weapon.

But Kuska, warns “while Poland has started to invest more heavily into the cyber defense of the country, it is yet to be seen if these efforts will form a robust force capable of defending the nations cybersphere.”

On the Backburner: Tanks and Submarines

Warsaw has chosen to modernize its aging tanks instead of replacing them.

“There is some work done with Polish Leopard II main battle tanks...” Kuska notes. “Some modernization will be also performed on the T-72 but the upgrades won’t get even close to the Russian T-72B3, so many question such limited modernization plans.”

In theory, Warsaw would like submarines that could interdict Russian ships and subs in the Baltic, and even launch offensive cruise-missiles. But despite attractive candidates including France’s larger Scorpene-class submarine, or the Swedish A26 submarine and German Type 212CD submarines with Air-Independent Propulsion, the Orka program remains grounded.

But Kuska feels the hesitancy to proceed with Orka is defensible.

“What type of vessels are actually needed on such a small, quite easy to lock down sea [the Baltic]? Maybe a strong ground-based, mobile anti-ship missile system guarding the shores of the country, connected with a bunch of smaller vessels, would be sufficient for Poland?”

While Poland is spending a lot to acquire on big-ticket weapons, alone these may not suffice to compensate for deficiencies elsewhere in its force structure.

“The most well-known programs like Patriot air defense system, rocket artillery like M142 and the F-35 won’t solve the problem,” says Kuska. “They are just pieces [of the puzzle], very important ones, but there are a whole bunch of other systems that need attention.”

“There are ongoing negotiations, and it is hard to predict what will happen if, for example, an economic crisis hits the world. Will Poland be able to sustain its modernization or will it be left with those few very good systems which won’t be able to fill all of the gaps?”