Once the Victim, Rwanda is Fixing Peacekeeping Across Africa 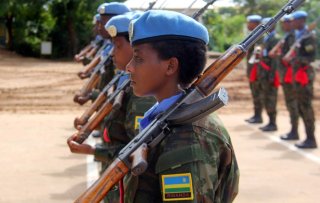 The most frustrating aspect of the 1994 anti-Tutsi Genocide in Rwanda was how preventable it was. Kofi Annan, then-Undersecretary General for Peacekeeping Operations, ordered his men to stand down as Hutu extremists rose up in a preplanned campaign to slaughter Tutsis and moderate Hutus. Four years later, Annan—by then United Nations (UN) Secretary-General—offered a qualified apology but, for a million Rwandans, it was too late.

It may be unfair to only blame Annan. Rwanda may be the most egregious example of peacekeeping failure but, with a few notable exceptions, few missions succeed. Here, both outside powers and the nature of the UN bureaucracy are to blame. In Rwanda, the French government cynically supported and even trained Hutu extremists behind the scenes. Today, the Kremlin often interferes via the Wagner Group. Perhaps more importantly, UN peacekeepers lack authority to use lethal force absent explicit permission from bureaucrats sitting thousands of miles and several time zones away. At its quickest, the UN might take hours to respond when the intricacies of the battlefield require split-second reactions.

As a result, many peacekeeping activities seem more pro-forma than real. In October 2000, Indian peacekeepers working for the UN Interim Force in Lebanon (UNIFIL) videotaped a cross-border Hezbollah operation in which the terrorists kidnapped Israeli soldiers, but the UN monitors did nothing to disrupt the operation. After tensions between Israel and Lebanon subsequently erupted into conflict, the UN leadership promised to enhance peacekeeping, but little changed and Hezbollah rebuilt a missile arsenal more robust than what it possessed during the 2006 war.

Lebanon is no exception. Last month, I accompanied a UN peacekeeping force on a nighttime motorized patrol just outside of Bangui, the capital of the Central African Republic along roads not far from the Ubangi River that separates the Central African Republic from the Democratic Republic of Congo. In theory, the patrol was to counter smuggling. I asked what utility the patrol could be if smugglers on foot could hear the engines of the armored personnel carrier and technicals, see headlights from dozens of meters away, and simply remain in the surrounding forest. The response was the UN mission was to observe, not confront, and that they could report that they encountered no challenge. The UN leadership in New York had no interest in putting patrols on foot and equipping them with night-vision goggles so that they could intercept smugglers. Avoiding conflict trumped preventing one.

For the Central African Republic, theater has a cost. Decades of poor governance and French exploitation have frayed the country’s ethnic, tribal, and religious framework. In 2013, the largely Muslim Séléka militia rebelled and ended François Bozizé's decade-long rule. Central Africans fled to nearby Congo and Cameroon as fighting and sectarian violence engulfed the capital. Fighting paused as the UN hastily established the UN Multidimensional Integrated Stabilization Mission in the Central African Republic (MINUSCA), built on foundations laid by the African Union. For a time, it worked. Catherine Samba-Panza became transitional president and oversaw the drafting of a new constitution which, in December 2015, Central Africans approved in a referendum. Faustin-Archange Touadéra, a mathematician and university administrator subsequently won a two-round election. He was a low-energy ruler, however, departing Bangui every weekend to spend time in Damara, his family’s ancestral home. The situation became messy in December 2020 when opposition groups unsuccessfully sought a delay to the election that Toudera won, and rebel groups began to march on the capital. Those in Bangui at the time described panic as residents expected sectarian reprisals and ethnic massacres and prepared to flee. UN peacekeepers, meanwhile, stood down. The situation was in many ways analogous to Rwanda in the days before the genocide began.

Toudera called for help, but the UN was unwilling to provide any concrete assistance. Neither was France or the United States. Rwandan president Paul Kagame, however, returned his call. Within twenty-four hours, a Rwandan force flew into the Bangui M'Poko International Airport to secure it. While MINUSCA continued its general peacekeeping mission and had a heavy Rwandan component, the new Rwandan deployment was the result of a bilateral agreement between the Rwandan and Central African governments. While MINUSCA in theory kept peace and continues its observations, patrols, human rights monitoring, and efforts to decommission, disarm, and reintegrate former rebels, the Rwandan bilateral forces based just a few miles away could do what the UN could not. It was telling that as rebels approached to within sixteen miles of Bangui’s center, Egyptian, Nepalese, and other MINUSCA components redeployed to just outside Rwandan positions on the understanding that Rwandan bilateral forces could provide them the security that the UN headquarters in New York never would.

While MINUSCA might theatrically patrol, Rwandan bilateral forces are far more effective and can exploit intelligence more quickly from captured rebel phones. Not only did the bilateral camp commander claim his men could be on the road to respond to threats within minutes, he showed me their dispatch. In effect, Rwanda—at its own expense and in order to prevent a repeat of the type of genocide they suffered—has married a bilateral force to UN peacekeepers in order to overcome the impediments that have undermined UN peacekeeping for generations.

Nor is the Central African Republic alone. Prior to the Malian junta’s expulsion of French forces, French special forces effectively embraced the same model in that west African country. There is only so much the United Nations Multidimensional Integrated Stabilization Mission in Mali (MINUSMA) can do. Mali was once among Africa’s most democratic states but has suffered in the last decade as loose weaponry flowing from Libya’s collapse gave new sustenance to separatists and rebels all too ready to affiliate with Al Qaeda. MINUSMA leaders understood they could call the French bilateral forces to address urgent problems they were ill-equipped to resolve. It worked until the Malian military junta grew upset at French officials for pushing for a return to civilian rule and grew frustrated at French soldiers for refusing to interpret a narrow anti-insurgency mission into broader reprisals against the entire Fulani ethnic group, some of whom had given sustenance to the rebels. (Unfortunately for Mali, the Wagner Group has no such compunction).

A similar model is now at play in the eastern Democratic Republic of Congo (DRC), where the United Nations has stood up a force intervention brigade to target rebel groups, the more conventional of which it largely succeeded in neutralizing. The United States and other nations, however, could do far more to build Congolese capacity to target remaining rebels, such as the génocidaires whom Annan allowed to retain arms and settle just across the Rwanda-Congolese frontier, as well as Islamic State-inspired groups that increasingly seek safe-haven in the DRC. In Mozambique, as well, bilateral deployments—whether Rwandan or from the Southern African Development Community—have also done what the UN could not by pushing back Islamic State-affiliated insurgents who briefly seized much of the northern Cabo Delgado province.

The UN is a huge bureaucracy and resistant to change, but even the most ardent UN partisans acknowledge the mixed record of UN peacekeeping missions. If reform is not possible—and too many stakeholders would reject the notion of empowering UN peacekeepers to aggressively hunt down, detain, or even kill terrorists and human rights abusers—then it behooves the UN to embrace openly a model that works. Perhaps, twenty-eight years after the anti-Tutsi genocide, its former victims have finally demonstrated a lasting fix, in which regional bilateral forces marry themselves to UN peacekeepers to work in tandem to prevent the next genocide and help troubled countries return to stability.