Power Projection: Expeditionary Sea Base Ships Are Built For One Mission 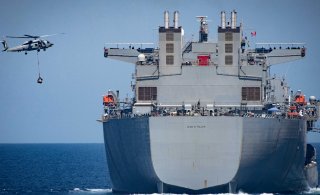 The Navy has now embarked upon building its eighth ESB in a clear effort to expand its ability to stage operations at sea. ESBs operate with four MH-53E helicopter landing spots, rigid inflatable boats, and hangar space for additional aircraft. The ships are also configured for berthing and facilitating special operations missions. Given these features, ESBs are likely to be in great demand in vital areas like the Pacific.

“ESBs are equipped with a four-spot flight deck and hangar and are designed around four core capabilities: aviation facilities, berthing, equipment staging support, and command and control,” a recent National Steel and Shipbuilding Company report noted.

The report noted that the ESB’s flight deck can support H-53, H-60, and V-22 tilt-rotor aircraft. Moreover, ESBs can function as command and control hubs or motherships in position to dispatch small, high-speed attack units or even launch drones. Launching and operating drones from an ESB can be made possible by integrating Littoral Combat Ship (LCS) mission packages onto the ship, Navy weapons developers have said. The Navy's decision to retire a large number of LCS ships may be part of why the service is finding expanded uses for some of its technologies, including the mission packages, which focus on anti-submarine warfare, surface attack, and mine hunting.

ESBs, which can function essentially as floating sea bases, would benefit from the ability to launch and recover drone boats after they carry out counter-mine, surveillance, and attack missions. The Navy’s Littoral Combat Ship mission packages can be smoothly integrated onto ESBs because they were designed to be modular, meaning that they were built with a set of common technical standards and interfaces to accommodate new systems and technologies as they become available.

ESBs may even be able to launch unmanned underwater vehicles to network with submarines, hunt mines, or survey high-threat areas. The Navy’s concept of Seabasing, supported by a rapid expansion of its drone fleet, can greatly expand the services’ ability to project power in critical maritime areas, particularly the Pacific.

The sheer maritime expanse of the Pacific is filled with dangerous flashpoints, such as the South China Sea, the Senkaku Islands near Japan, and, of course, Taiwan. Any great power confrontation in the Pacific would rely heavily upon the U.S. Navy’s ability to project and sustain power from the sea. The Navy may be developing the ESB’s designs and technological configurations with this in mind.