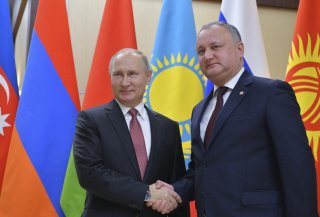 A Moldovan court has placed opposition leader and former president Igor Dodon under house arrest for thirty days on suspicion of treason, corruption, and violations of Moldova’s campaign finance law. Dodon claims the arrest is retribution for his vocal support of Russia and advocacy for Russian leader Vladimir Putin.

Dodon served as Moldova’s president from 2016 to 2020 and currently serves as the honorary leader of the Party of Socialists, the country’s largest opposition party. The former president was first detained on Tuesday after Moldovan police searched his home in Chisinau, Moldova’s capital. Prosecutors claimed after the search that they had recovered “large amounts” of money and luxury items from the search and that one of the people whose property had been searched had attempted to destroy documents describing a €700,000 (roughly $750,000) real estate purchase.

At his arraignment, Dodon claimed that the order for his arrest had been a “political order” issued by President Maia Sandu, who defeated Dodon in Moldova’s 2020 election, and anti-Russian Western governments.

“It is a political issue aimed at neutralizing the opposition,” Dodon said as he left the courtroom, claiming that the Sandu administration had “filled … state institutions with foreign, Romanian, American, and German advisors, who control all of the institutions.”

Europe’s growing tensions with Russia have divided Moldova, a historical client state of the Soviet Union whose strongly pro-Western ruling party has contended with a strongly pro-Russian minority. After Moldova left the Soviet Union in 1991, its easternmost region, known as “Transnistria” in the West, seceded from the new government and gained de facto independence after a brief military conflict. While roughly three-fourths of Moldovans consider themselves ethnically Moldovan, a majority of Transnistria’s population is ethnically and linguistically Russian, and the breakaway state has vocally supported the Kremlin’s invasion of Ukraine. Although it has not taken part in the conflict, Transnistrian leaders have blamed Ukrainian incursions for explosions within the region, leading to speculation that it might seek to justify a more active role in the future.

The Russian government reacted with concern to Dodon’s arrest. Kremlin spokesman Dmitry Peskov expressed “alarm” that “such a practice and persecution is being used against those who are supporters of the development of friendly … relations with the Russian Federation,” although he acknowledged that Dodon’s arrest was an internal matter within Moldova.

Peskov also called on the Moldovan government to respect Dodon’s rights during the investigation and potential trial.