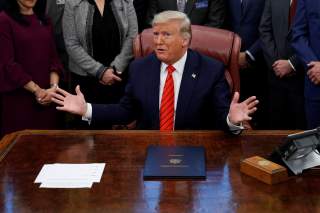 The New Hampshire primary spotlighted a Democrat contest in disarray, which is likely to help President Donald Trump in his reelection effort.

Standby for references to the line from the poem “The Second Coming” by Yeats: “Things fall apart; the center cannot hold.” A clear outcome of New Hampshire is that the Democrat establishment’s best hope, former Vice President Joe Biden, is near the end of his campaign.  His last chance is the long shot that South Carolina Democrats discover some appeal to him and his candidacy before their February 29 vote that eluded voters in Iowa and New Hampshire.

Just as worrisome for the establishment, the alternative to Biden isn’t clear. Former Mayor Pete Buttigieg did well in Iowa and New Hampshire and, almost as important, has beaten the expectations contest. Even though he raised his hand for open borders and free healthcare for illegal immigrants with the other Democrat candidates, he has positioned himself as more moderate in tone than frontrunner Bernie Sanders and Elizabeth Warren, both progressive New England senators. While there are huge differences, he could try to pass himself off as an outside-the-Beltway moderate administrator like Jimmy Carter or Bill Clinton in 1976 or 1992 respectively.

But Buttigieg must contend with a strong performance by Minnesota Senator Amy Klobuchar, who is folksy, comes as close to a pragmatist as possible in the radical ranks of today’s Senate Democrats, and most important, is a woman. That factor in today’s identity-driven Democrat Party, which trumps merit, experience, and accomplishment, cannot be underestimated, especially after the shock loss of Hillary Clinton in 2016.

Klobuchar also lacks two lodestones around the neck of another reputed centrist in the Democrat field, Michael Bloomberg: a New York accent and a coastal elitist view of the world. Unfortunately, she also lacks Bloomberg’s billions. He will soon reprise the strategy of Republican Rudy Giuliani in 2008: lose the first three small-state nominating contests and hope to be saved in Florida, especially with its expensive media markets and ranks of northeastern refugees. While Rudy failed, Florida was the salvation for Mitt Romney’s primary campaign four years later after a drubbing in South Carolina at the hands of Newt Gingrich. Sometimes money works, sometimes it doesn’t.

But the biggest story remains the front-runner status of Sanders, who for most of his career has found the Democrat Party insufficiently leftwing. His ascendance not only foretells doom in November for Democrat efforts to win back the White House; the progressive surge may also be putting the Democrat-controlled House of Representatives in play.

Explains Jim Bognet, a former Trump appointee seeking to flip a northeast Pennsylvania House seat from Democrat to Republican: “I have been saying for years that many Democrats are going down the path of socialism. New Hampshire Democrats anointed an unrepentant socialist as the avatar of the Democrat Party. Trump, conservative candidates who support him, and working-class Americans are all that stands between a socialist takeover of America.”

Put simply, Bernie will be a rallying point, but not for the people or cause the Democrats want to rally.

The challenge for Trump is to encourage but not overshadow the growing food fight within the Democrat Party. All of the candidates except Klobuchar are likely to sling more mud at their opponents in the coming days.

Republicans must also avoid over-confidence as Democrats flail and the economy accelerates. Overall voter approval of Trump is near its historic high, with Gallup recently registering 49 percent support. If you ask voters about support for Trump on the economy, which is the most important issue, the number climbs toward 60 percent.

But turbulence undoubtedly lies ahead. Democrats command near-complete support for the heights of our culture, as evidenced just this week by the preachy progressivism at the Oscars and on any given day by the media. Their effort to elect the eventual Democrat nominee will be unsurpassed in history.

Furthermore, every dog has his day. The New York Times gleefully reported four months before the 1988 election that Massachusetts Governor Michael Dukakis held a 55-38 lead in a poll over then-Vice President George H. W. Bush. They were less gleeful on election night when Bush won.

The coming campaign won’t only tell us whether the Democrats can get their act together. Signs indicate they probably will not. It will also tell us whether the Jacksonian impulse of the 2016 election was just a populist spasm against the failed establishment of both parties, or whether it marked a more fundamental change.

The Democrats’ worst nightmare isn’t just losing one presidential election for want of a solid candidate. Their unspeakable horror is that Trump has assembled a new and durable coalition—a new right—that will dominate politics for a generation just as the watershed New Deal and Reagan coalitions did in their times.