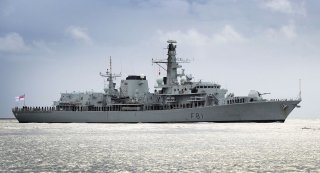 The Baltic Sea has been quite crowded with military warships and aircraft this month, and to the observing eye, it could appear that a major war is being fought in the remote corner of Europe as NATO and Russia each conducted a series of drills and exercises.

The British Royal Navy announced that as NATO’s Baltic Operations (Baltops) begins its second week, its two hundred sailors aboard the Portsmouth-based frigate HMS Kent were “tested to the limit” even as aviators from Russia's Baltic Fleet flexed their muscles in a display of aerial power.

The frigate, which is one of two Royal Navy warships that joined the more than two dozen vessels and a similar number of aircraft, traveled well over five hundred miles from the southern Baltic and around the Danish island of Bornholm, to the Latvian coastline during the exercises. Baltops, which is in its forty-ninth year, saw upwards of three thousand military personnel take part in the annual international test of naval and air power. As the exercise name suggests, the goal of Baltops is to test the ability of seventeen NATO and allied/partner nations to guarantee the freedom and security of nations with a Baltic coastline.

Russia held its own exercises that were likely meant to be a clear counter-demonstration and show of arms to NATO. Nearly a dozen aircraft from the Baltic Fleet’s naval aviation wing took part in strikes against a notional enemy’s amphibious assault ship. This included Su-24 frontline bombers and Su-30SM fighter, which were supported by a wing of Su-27 Flankers.

While it is unclear how close the Russian exercises were to the NATO operations, the former head of the Royal Navy called the situation dangerous and warned that the drills could become something far deadlier.

“The Russians have been very dangerous in the last couple of years where they have flown very close to other aircraft that are operating in an unnecessary and very dangerous way,” Adm. Lord Alan West told the British media outlet The News. “Historically one has always monitored other people's exercises. But Russia has had a number of very dangerous near-misses and the problem is there could be an accident and things could escalate.”

Moscow has raised fears over the deployment of NATO forces in the region and has called the exercises a security threat. Both sides have blamed the other for conducting such “destabilizing” military drills near the borders.

However, last month the Russian Navy announced that the Baltic Fleet will be bolstered with the addition of six new Karakurt-class corvettes from Project 22800, which are each equipped with the Kalibr cruise missiles as well as modern control, radio, navigation, electronic warfare systems, counter-division armaments, and man-portable air-defense systems. The ships were designed to act as part of a naval group or to be deployed on their own.

The Russian Baltic Fleet was established by Russian Czar Peter the Great in May 1803. It is the oldest Russian Navy formation.