Russia Is Getting Ready for a Baltic Region Military Bonanza 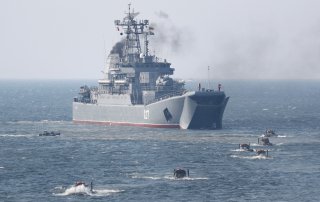 Russia’s Baltic Fleet is embarking on a series of military exercises, paving the way for the large-scale Zapad 2021 drills later this year.

The Baltic Fleet’s press service reported earlier this week that over three thousand servicemen and three hundred pieces of military equipment took part in military preparedness exercises, partly held in the Kaliningrad region; these included rapid deployment and redeployment drills and “alert procedures.” There were also live fire sessions with small arms, as well as combat exercises with the armaments of the BMP-2 armored personnel carrier (APC) and T-72B3 tank against notional enemy armor. The Baltic Fleet’s naval aviation units likewise engaged in combat drills, the content of which has not been revealed at this time, during the same period. The exercises are seemingly aimed at enhancing general combat efficacy and readiness. They are expected to last one week.

A branch of Russia’s Western Military District, the Baltic Fleet is headquartered in St. Petersburg; however, it operates in large part out of Russia’s central European enclave of Kaliningrad. From there, it is poised to play an Anti-Access/Area Denial (A2/AD) role in the event of a major conventional war with the North Atlantic Treaty Organization (NATO). In peacetime, Kaliningrad serves as a forward deployment base and operating center to help Russia’s armed forces maintain a military presence in Baltic waters and airspace.

The Baltic region has been the site of recurrent military tensions between Russia and NATO. Russian VIP government planes, notably including that of Defense Minister Sergei Shoigu, commonly fly over Baltic airspace to and from Kaliningrad. These flights have frequently resulted in tense interceptions involving NATO patrol aircraft and supporting Russian fighters.

The Baltic Fleet’s most recent January drills, and others like it, are paving the way for ZAPAD 2021: a far-reaching set of joint exercises that will involve the Western Military District and units from Belarus’s military. ZAPAD (the Russian word for “west”) 2021 is part of Russia’s four main regional exercises. The other three are VOSTOK (east), TSENTR (center) and KAVKAZ (Caucasus). Held annually in rotating fashion—i.e.  VOSTOK 2018, and TSENTR 2019, KAVKAZ 2020, and now ZAPAD 2021—these regional joint drills are typically among Russia’s most ambitious military events.

The ZAPAD 2021 exercises, which are slated for September, will reportedly focus on countermeasures against enemy cruise missiles, as well as more unconventional battlefield tools including anti-drone measures and electronic warfare. “The Zapad-2021 drills will focus on combating cruise missiles and unmanned aerial vehicles, as well as on fire and electronic warfare activities against enemy formations, ways to train airborne troops’ vertical envelopment capability and rapidly shift between military activities,” according to a statement by the Western Military District.