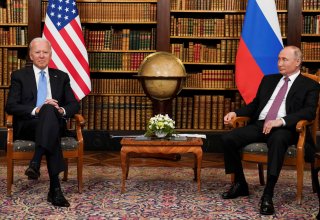 The West has taken a hesitant, incremental, and minimalist approach to the mounting Russian aggression that is fueled by Vladimir Putin’s revanchist ambitions. Russia would not currently pose a grave threat to Ukraine, Eastern Europe, and beyond if the West had responded convincingly and promptly to Russia’s ever more hostile provocations. While it is true that Russia overplayed a relatively weak hand, it is also true that the United States and its allies permitted Russia to do so, allowing Moscow to steadily rebuild much of what it lost when the Soviet Union collapsed.

The Decline of American Power

In an upside down dynamic, in which the stronger power gradually gives way to the weaker power, the United States has ceded more and more as Russia’s might has grown. Because of unforced errors and unnecessary concessions, the measures the United States must now take to stop Russia from waging war to reclaim a Soviet-style sphere of influence will be much more arduous and dangerous than measures it could have taken previously. In our post-Cold War complacency, we forgot the post-World War II lesson: burying our heads in the sand in the face of escalating hostilities and atrocities only increases the chance that we’ll be forced into military action by events spiraling out of control.

The United States has allowed its own great power status and position as the leader of the free world to depreciate while underestimating Russia’s ability to reclaim great power status and reassert global influence. With its massive military buildup, incursions in Georgia, Ukraine, and Syria, and information operations and energy blackmail throughout the world, Russia has become a formidable adversary. Putin has reaped geopolitical rewards by backing paramilitary groups and anti-democratic strongmen and steadily exploiting ethnic divisions, financial corruption, and political violence. All the while, Western penalties for Russia’s egregious transgressions and severe human rights violations have been inadequate.

The first step toward checking Putin’s Russia would have been recognizing the seriousness of the threat. Putin has spent billions to dramatically rebuild and modernize Russia’s military. In addition, Russia has made great advances in hybrid, cyber, and nuclear capabilities. The Russian military has fielded hypersonic missiles and provided Russian forces with regiments of S-400 air defense systems. Russia’s deployed nuclear arsenal now exceeds that of the United States. Former Chairman of the Joint Chiefs of Staff Joseph Dunford, Air Force General Paul Selva, Commander of U.S. Strategic Command General John Hyten, and current Lt. General Scott Berrier have all described the Russian threat to the United States and its allies as “existential.” A general at a recent conference bemoaned that “Russia freely talks about limited use of nuclear weapons in response to Article V … who does that?”

Russia has further enhanced its power by greatly expanding its strategic and military relationships with China and Iran. The three countries benefit from weapons and technology transfers and often provide cover for the foreign policy “misdeeds” of each other, presenting, in the words of one analyst, an “anti-Western global front.” Moreover, Russia has repeatedly violated or exploited the very agreements the West relies on. Putin has thereby disproven the West’s wishful theory that the post-Cold War world would be so “safe for democracy” that it would no longer require vigorous deterrence and resolve. Indeed, our temporary reprieve from significant sacrifice and effort has set us up for trials and tribulations. The need for tough responses to Russian aggression was evident years ago.

The Obama administration enabled Russia by negotiating an overly generous START treaty, dismantling plans for Eastern European missile defenses, snubbing NATO aspirants, failing to develop countermeasures to Russia’s military modernization, and deferring to Russia in Syria. The costs of Obama’s strategic and moral inertia regarding Russia’s annexation of Crimea and hybrid warfare against Ukraine can still be seen today. President Trump’s approach—with his weak response to Russian election interference, harsh criticism of U.S. allies, and unseemly flattery of Vladimir Putin—left much to be desired. But his administration still enacted tougher measures on Russia than the Obama administration did. The Trump administration countered Russia’s military modernization through increased defense spending and new European defense initiatives and military exercises. The Trump administration also challenged Russia’s malign influence by providing significant military assistance to Ukraine and sanctioning Russian allies and oligarchs. Finally, Trump officials took a strong stance against the Russia-enabling, Europe-destabilizing, and Ukraine-threatening Nord Stream 2 pipeline by imposing tough sanctions and pressuring Germany to give up the disastrous project.

Nowhere has the United States’ reactive approach to Russian bellicosity and expansionism been more evident than in the Biden administration, which has taken the moral and strategic prevarication of the West to new lows. Although it received little attention at the time, Russia amassed an estimated 110,000 troops near Ukraine by May of 2021. After Putin agreed to a summit with Biden and said he would draw down the troops, the National Security Council “temporarily halted” a $100 million military aid package for Ukraine. Even though Russia kept its troops at the Ukrainian border and was thought responsible for a cyberattack against American infrastructure, Biden continued to “pause” the aid. Thus, Russia was already testing the waters of escalating its war on Ukraine last spring.

In response to the continued mobilization of Russian troops at the Ukrainian border last fall and winter, the Biden administration prepared a $200 million package of military aid for Ukraine. But that aid, too, was “held back” for the sake of the diplomatic process and more meetings between Biden and Putin. As if to announce their aversion to the reality that deterrence requires hard power, just before the Biden-Putin meeting on December 7, President Biden and Secretary of Defense Lloyd Austin announced that the option of NATO troops fighting to defend Ukraine was off the table. In a squandering of American leverage and preemption, Austin claimed that “our goal … is to lead with diplomacy, and address these issues in a way that we don’t get into conflict.”

Biden followed up his meeting with Putin with steps that amounted to more pressure on Ukraine than on Russia. Effectively accepting a Russian fait accompli that would allow it to consolidate and expand its illicit gains, Biden threatened to impose sanctions on Nord Stream 2 or close Russia out of SWIFT only if Russia invaded Ukraine. In doing so, Biden ruled out punishing Putin for his bellicose provocations. He thus ignored the plea of nine eastern flank NATO allies and twenty-two members of Congress who signed a letter urging him to immediately sanction Nord Stream 2. Making matters worse, he applied executive branch pressure on Democrats who supported the sanctions to force them to change their position. The final National Defense Authorization Act did not include Nord Stream 2 sanctions and a provision that required simply “evaluating” whether individuals connected to the imprisonment of opposition leader Alexei Navalny should be sanctioned.

Since the Biden administration sees the threat of future sanctions as a primary deterrent, it should have convinced Putin that they would be harsh and strongly enforced. Instead, weak sanctions and enforcement, as well as the waiving of Nord Stream 2 sanctions that the Trump administration had imposed, gave Putin more appetite for risk. The West too often makes concessions for future promises or warns of future sanctions for continued aggression. But these efforts fail because they lack credibility. What incentive does Putin have to keep promises and reduce hostility when he has incurred few potent consequences so far?

In the meantime, a startling Associated Press article reported that Biden even planned to advise Ukrainian president Volodymyr Zelensky to cede territory to Russia. Although White House press secretary Jen Psaki disputed the report, the Biden administration’s plan actually amounted to pressuring Ukraine to give up territory. The administration pressured Ukraine to make compromises in keeping with the 2015 Minsk agreement, which, as Tom Rogan wrote, was agreed to “only amid Russian-directed rebel military action and simultaneous pressure from Chancellor Angela Merkel and then-French President Francois Holland.” Rogan noted that the agreement would “turn southeastern Ukraine into a satellite state.”

Ensuing meetings between the Biden administration and the Russians allowed the world to see Biden’s unwillingness to use America’s moral gravitas and military advantage to rally a tough allied response to the Russian threat. Russia’s ever more brazen escalation and demands were met not with strong deterrent measures, but with American and European attempts to find a “diplomatic offramp.” America thereby showed both an underestimation of Russian power and an underestimation of its own. Conspicuously absent were soaring words of support for democracy, expanded military exercises in Eastern Europe, the timely delivery of defensive weapons to Ukraine, and meaningful sanctions on Russia.

Stunningly, Biden proposed a meeting with major NATO allies and Russia to discuss Russian “concerns” about NATO “expansion.” He thereby lent credence to Russian propaganda claims that NATO might attack Russia and marginalized other countries’ legitimate concerns that Russia might attack them. In doing so, Biden supported a process wherein big powers push smaller powers toward self-destructive concessions. Moreover, he implied indefinite delays to a path that would allow Ukraine to join NATO, thereby further compromising Ukraine’s position. The threat Putin does see in NATO is its very existence as a defensive military alliance of democracies that appeals to former Soviet satellite states and, potentially, to Russians themselves. As such, it interferes with Putin’s resurgent, anti-democratic designs to recreate a Soviet-style sphere of influence.