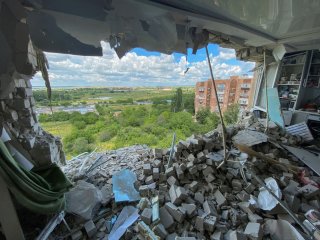 The Russian strikes come shortly on the heels of Russian foreign minister Sergey Lavrov’s statement that Russia’s war aims extend beyond the Donbass region, most of which is now occupied by Russian and Russian-aligned separatist forces. “Now the geography is different. It is far from being only DPR [Donetsk People’s Republic] and LPR [Luhansk People’s Republic], it is also Kherson Region, Zaporizhzhia Region and a number of other territories, and this process continues, it continues steadily and persistently,” he said. John Kirby, the communications director at the National Security Council, announced earlier this week that Moscow is laying the groundwork for annexing more parts of eastern and southern Ukraine. “Russia is beginning to roll out a version of what you could call an ‘annexation playbook,’ very similar to the one we saw in 2014,” he said, referring to Russia’s annexation of Crimea during the 2014 Euromaidan crisis in Ukraine.

The invading Russian forces are continuing what has been a wide-ranging bombing and airstrike campaign against frontline Ukrainian cities. The southern city of Mykolaiv, nestled between Russian-occupied Kherson and the key southwestern port city of Odessa, fell under heavy Russian shelling again on Thursday, according to its mayor. The Russian military captured the twin cities of Severodonetsk and Lysychansk in prior months, dislodging Ukraine’s armed forces from their last outpost in the eastern Luhansk area. Russian forces continue to strike scores of Ukrainian cities and villages—including Kramatorsk, Toretsk, and Bakhmut—as they press on with their eastern ground offensive in the direction of Sloviansk, a vital Ukrainian stronghold in the industrial Donetsk region. Reuters reported earlier this month that six people were killed in Sloviansk by intense shelling from Russian rocket launcher systems. The city’s mayor, Vadim Lyakh, urged residents to flee in anticipation of a possible siege scenario.