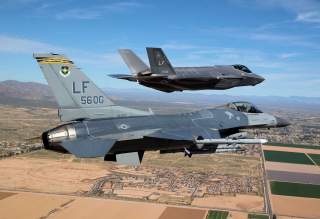 Key point: Taiwan will also retire its ageing Mirage 2000 fighter aircraft due to high maintenance costs and to make room in the budget for new F-16s. Of the sixty fighters France sold Taiwan in the 1990s, fifty-six remain operational. “We would like to resale the Mirage fighters to a third country,” said one source.

TAIPEI - Taiwan’s air force will cease campaigning for the F-35 Lightning stealth fighter aircraft and will, instead, reissue a request to the U.S. government for F-16 fighters.

This is, in part, a resurrection of an abandoned effort to procure sixty-six F-16C/D Block 50/52s killed by the Obama administration due to Chinese pressure. Beijing had dubbed the sale of new F-16s to Taiwan a “red line” and has repeatedly threatened to invade the self-ruled island.

One source said PBL was a “critical part of the package…we must have it.”

The package is consistent with Taiwan president Tsai Ing-wen’s indigenous defense industry policy that mandates local production of weapon systems that in the past were procured only from the United States. In part, the policy weens Taiwan away from dependency on the United States for weapon sales that are often influenced by Washington’s fickle relationship with Beijing.

Local sources also want the PBL to expand later to include Taiwan’s current F-16 upgrade effort. Taiwan procured 150 F-16A/B Block 20 fighters in the 1990s and is currently upgrading them to F-16V as part of the $5 billion Phoenix Rising Program.

The PBL could later be expanded for the fleet of twenty C-130H Hercules cargo/transport aircraft and twelve P-3C Orion maritime patrol aircraft, all Lockheed Martin products.

The air force is also upgrading its Indigenous Defense Fighters (IDF) under a program that will allow the IDF to carry more munitions and replace its radar and combat computer. Taiwan is down to 126 aircraft from the original 130 due to crashes.  It was constructed in the 1990s by state-run Aerospace Industrial Development Corporation (AIDC) in Taichung, which is also participating in the F-16V upgrade program.

AIDC is currently manufacturing a new advanced jet trainer (AJT) to replace its ageing AT-3 and F-5 fighter trainers. The new AJT, expected to roll-out in late 2019, is loosely based on the IDF design. AIDC plans to build sixty-six aircraft with operational deployment in 2026.

The air force turned its back on pursuing the F-35B short takeoff/vertical landing (STOVL) fighter due to a recent Taiwan National Security Council report. It indicated the stealth fighter was too exorbitant and untested in real combat to be a pragmatic choice for Taiwan.

There are also suspicions in Taiwan that opposition to the sale of a fifth-generation fighter would be raised in Washington over secrecy issues, as mainland Chinese espionage on the island is rampant.

The STOVL option was originally considered a practical requirement due to China’s vast arsenal of short-range ballistic missiles aimed at Taiwan. Military analysts in Taiwan and Washington predict that the air bases will be pummeled during the initial phase of a war.

However, Taiwan still needs an advanced fighter aircraft capability to maintain sovereignty and control of its air space, especially as China begins testing the island’s air defense capabilities with fighter and bomber aircraft sorties that now circumnavigate the island.

Taiwan will also retire its ageing Mirage 2000 fighter aircraft due to high maintenance costs and to make room in the budget for new F-16s. Of the sixty fighters France sold Taiwan in the 1990s, fifty-six remain operational. “We would like to resale the Mirage fighters to a third country,” said one source.