Taiwan to Treat Any Chinese Air Incursion as a ‘First Strike’ 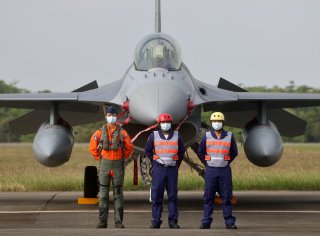 Taiwanese defense minister Chiu Kuo-cheng warned the government of China on Thursday not to enter Taiwan’s airspace, claiming that any intrusion would be regarded as the first strike in a cross-strait war.

Chiu outlined the self-governing island’s new defense policy at a meeting of the Foreign and National Defense Committee of the Legislative Yuan, Taiwan’s parliament. The defense minister noted that Taiwan had a longstanding policy against initiating a military conflict with its much larger western neighbor, but noted that “the definition has obviously changed” due to China’s increasing use of small drones to violate Taiwanese airspace.

“So we have adjusted and will view any crossing of [any] aerial entities as a first strike,” Chiu said. Although he provided no additional details on how Taipei would react to a Chinese incursion, he claimed that “countermeasures” would be employed against any provocation by Beijing.

Both Taiwan—officially known as the Republic of China—and mainland China, which have been governed separately since 1949, regard themselves as the legitimate Chinese government. Beijing has repeatedly threatened to invade Taiwan in recent years, claiming in policy documents that a return of Taipei to mainland control would mark the beginning of the “great rejuvenation of the Chinese nation.” Despite these tensions, the two states have long maintained a tacit agreement on airspace and water rights within the Taiwan Strait, divided by an unofficial “median line” down its center.

However, Chiu claimed in his remarks to the committee that Beijing had “destroyed” the consensus through naval and air harassment operations, including the flight of dozens of military aircraft into Taiwan’s “air defense identification zone,” or ADIZ. Although these flights do not enter Taiwan’s airspace proper, potentially provoking military action, they allow China’s military to gauge the readiness and response time of Taiwan’s air defenses.

The increased cross-strait tensions come in the aftermath of a high-profile visit to Taiwan by Speaker of the House Nancy Pelosi (D-CA) in early August. Pelosi’s visit—marking the most significant official U.S. visit to Taiwan since 1997, when Speaker of the House Newt Gingrich visited the island—was fiercely condemned by China and opposed by many in the United States, who argued that it was needlessly provocative with relatively little gain for Taipei. Pelosi defended her actions after her return to the United States, claiming that the visit had been “worth it” as a statement of American support for the island.