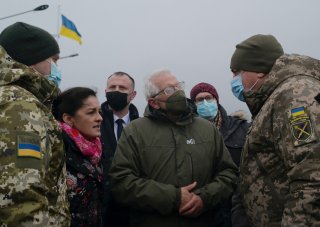 Josep Borrell, the High Representative of the European Union for Foreign Affairs, visited the front lines of the war in Ukraine earlier in the week, promising that Russia would experience “massive consequences” if it launched an invasion.

Borrell, the highest-ranking diplomat in the EU and the former President of the European Parliament, visited Luhansk, a region in eastern Ukraine divided between the government and the “Luhansk People’s Republic,” a Russian-allied separatist group. Footage broadcast on Ukrainian television showed Borrell meeting local civilians near one of the checkpoints between government-held and rebel-held territory.

“The conflict on the borders is on the verge of getting deeper, and tensions have been building up with respect to [...] European security as a whole,” Borrell told reporters present.

Concerns over the status of eastern Ukraine, where a war between the government and pro-Russian separatist movements has continued since 2014, escalated in recent months after Russia positioned tens of thousands of its troops on the border—a move that some observers noted could indicate it was preparing for an invasion. The Ukrainian government claimed that its intelligence services had learned that an invasion was scheduled for January, although the Russian government has strongly denied this.

Russian leaders have insisted that the Kremlin is not considering an invasion of Ukraine, but that it views its own security under threat due to close links between NATO and the post-2014 Ukrainian government.

U.S. and NATO attempts to de-escalate the conflict have conflicted with Russia’s requests for “red lines,” including a promise by NATO that Ukraine would never be allowed to join the military alliance. NATO leaders have refused to make this commitment, and President Joe Biden has supported them, arguing that NATO’s membership preferences are not subject to an external veto. Other Russian proposals, including a ban on training exercises and missile deployments in Eastern Europe, have also been received frostily in Brussels.

In spite of this apparent lack of common ground, U.S. and Russian negotiators are scheduled to meet in Geneva to discuss the crisis starting on January 9.

Borrell indicated in his visit that Russia would not be allowed to block Ukrainian NATO membership, noting that the security of Ukraine would have consequences for the rest of Europe.

“There is no security in Europe without the security of Ukraine,” the diplomat said, insisting that the European Union be allowed representation at “any discussion on European security” involving Russia.

Borrell is the first EU High Representative to visit eastern Ukraine since the beginning of the conflict in 2014.