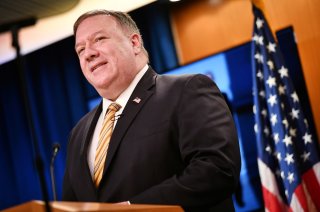 Secretary of State Mike Pompeo accused former Vice President Joe Biden of “appeasement” on Iran and China, but claimed that his comment was “not political.”

Biden is leading President Donald Trump in the upcoming presidential election by nearly fourteen points, a new poll released Wednesday shows. Pompeo’s comment could be a preview of a Trump campaign strategy to take back the initiative as November’s elections grow closer.

“You’ve seen—whether it was the Paris climate accords or the appeasement of the Ayatollah in Iran or the underwriting of the challenge that the Chinese Communist Party presents to the United States of America today,” Pompeo told the Hugh Hewitt Show on Tuesday. “There’s no reason to think that a President Biden would take any different action.”

It’s “not political” but “simply an observation” of Biden’s record, Pompeo added.

The Trump administration has tried to reverse several Obama-Biden foreign policy initiatives, including the Paris climate accord, which would have committed the United States to reduce its carbon emissions over the coming decades.

Perhaps the biggest point of disagreement between the two administrations has been Iran. President Barack Obama signed a 2015 deal to regulate the Iranian nuclear program, but Trump unleashed a campaign of “maximum pressure” aimed at bringing Iran to heel.

But the pressure campaign has failed to extract any diplomatic concessions from Iran, and Democrats say that it has put the United States on a path to an unconstitutional war.

Biden’s advisors have called Trump’s approach towards Iran a “failure on its own terms” and promised to return to the 2015 deal.

Brian Hook, the State Department official currently overseeing Iranian affairs, has said that “there is not going to be much of [the deal] left to join” by the time Trump leaves office.

Trump and Biden are also both attempting to portray one another as weak on China.

Biden released a campaign ad in April accusing Trump of failing to hold Chinese leadership accountable for the coronavirus pandemic.

“Nobody frustrated the world’s efforts to try to get China to change its early behaviors more than Donald Trump did,” Sen. Chris Murphy (D-Conn.) told the National Interest in May.

The Chinese government is “desperate to have Sleepy Joe Biden win the presidential race so they can continue to rip-off the United States, as they have done for decades, until I came along!” Trump wrote on Twitter last month.

Pompeo used a meeting with his Chinese counterpart Yang Jiechi in Hawaii last week to bolster his boss’s credentials on China.

“I wanted to meet because we have a Chinese Communist Party that is behaving in ways that fundamentally put the American people’s security at risk,” he told Hugh Hewitt. “I work for a president for the first time in decades who has taken this threat seriously.”